Around this time of year there's often a lot of complaint that the 'true' meaning of Christmas has been lost. Those familiar with the the traditions of the Mystery Schools will certainly agree, but not for reasons that the layman may think. On the origins of Christmas:


"Indeed, it is admitted by the most learned and candid writers of all parties that the day of our Lord's birth cannot be determined, and that within the Christian Church no such festival as Christmas was ever heard of till the third century, and that not till the fourth century was far advanced did it gain observance. How, then, did the Roman Church fix on December the 25th as Christmas-day? Why, thus: Long before the fourth century, and long before the Christian era itself, a festival was celebrated among the heathen, at that precise time of the year, in honour of the birth of the son of the Babylonian queen of heaven; and it may fairly be presumed that, in order to conciliate  the heathen, and to swell the number of nominal adherents of Christianity, the same festival was adopted by the Roman Church, giving it only the name of Christ."
(The Two Babylons, Alexander Hislop. pg. 93)

"Certain it is that the winter solstice, which the ancients erroneously assigned to the twenty-fifth of December, was celebrated in antiquity as the Birthday of the Sun, and that festal lights or fires were kindled on this joyous occasion, Our Christmas festival is nothing but a continuation under a Christian name of this old solar festivity; for the ecclesiastical authorities saw fit, about the end of the third or the beginning of the fourth century, arbitrarily to transfer the nativity of Christ from the sixth day of January to the twenty-fifth of December, for the purpose of diverting to their Lord the worship which the heathen had hitherto paid on that day to the sun.

"In modern Christendom the ancient fire-festival of the winter solstice appears to survive, or to have survived down to recent years, in the old custom of the Yule log, clog, or block, as it was variously called in England... That the Yule log was only the winter counterpart of the Midsummer bonfire, kindled within doors instead of in the open air on account of the cold and inclement weather of the season... But while the two solstices celebrations were both festivals of fire, the necessity or desirability of holding the winter celebration within doors lent it the character of a private or domestic festivity, which contrasts strongly with the publicity of the summer celebration, at which the people gathered on some open space or conspicuous height, kindled a huge bonfire in common, and danced and mad merry round it together."
(The Golden Bough, James Frazer, pg. 736-737) 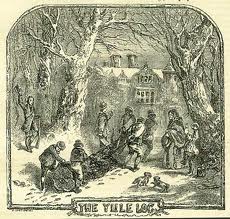 While the winter solstice was primarily an indoor affair in Europe, some regions did celebrate it via an elevated (and presumably very cold) outdoor festival:

"And even now there are certain rites performed under the sacred mistletoe on Christmas Day which certainly have little to do with Christianity."
(The Veil of Isis, William Winwood Reade, pg. 98) 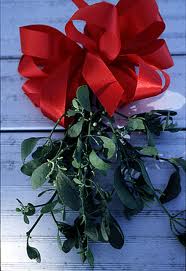 Mistletoe and 'old Christmas Day' (January 6th) are especially interesting when considering the origins of Christmas. As to the former, it was a sacred to the Druids (specifically the kind that grew on oaks), and was consumed in certain religious rites as well as for medicinal purposes. This has led some to speculate that mistletoe was consumed in part to produce hallucinations. Much debate rages as to whether mistletoe could be used as an entheogen, and if so, if the Druids did in fact use it in such a fashion:

"As to whether the symptoms include visionary experience, the reports are mixed. The mistletoe is a semi-parasitic plant inasmuch as it does photosynthesize, but it extracts and sequestors fluid and chemicals from its host. Hence, mistletoe grown on different hosts will contain differing elements, which in certain instances are visionary... It shares with the mushroom the tradition that they both are planted by the celestial lightning bolt; and its branches glowing a similar golden color in the winter when fly-agaric is not fruiting would make it a suitable symbolic surrogate...

"Although mistletoe grows commonly on various trees, such as apple, poplar, and willow, it was only the much rarer form found on the oak that the Druids considered sacred... and it was from the oak that the priests derived their name. Clad in white, they climbed the tree and harvested the mistletoe with a golden sickle, while others below received it in a white cloak, never allowing it to touch the ground. It was present at all their religious rituals, and they did eat it, sometimes making a potion from it. They were experienced herbalists, and may have had procedures for extracting the desired chemicals. The mistletoe was called the 'cure all' or panacea in their own language, probably not for its medicinal properties, but because of its role in shamanic healing. (The doctor took the drug, and not the patient.)

"It was fed as well to the victims for their rites of human sacrifice. The body of a Druid prince has been uncovered (the 'Lindow Man'), preserved in a peat bog for 2000 years; he had been ritually slaughtered; his body deposited in the bog, which was considered to be an entrance to the underworld; and the contents of his stomach reveal that he had been given the pollen of mistletoe to eat."
(The Apples of Apollo, Carl Ruck, Blaise Daniel Staples, Clark Heinrich, pgs. 19-20) 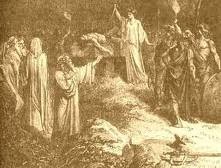 Mistletoe as a hallucinogen may tie in with the 'magnetic' properties the occult prescribes it:

"The Druids were priests and physicians, curing by magnetism and charging amylets with their fluidic influence. Their universal remedies were mistletoe and serpents' eggs, because these substances attract the astral light in a special manner. The solemnity with which mistletoe was cut down drew upon this plant the popular confidence and rendered it powerfully magnetic... The progress of magnetism will some day reveal to us the absorbing properties of mistletoe. We shall then understand the secret of those spongy growths which drew the unused virtues of plants and become surcharged with tinctures and savors. Mushrooms, truffles, gall on trees and the different kinds of mistletoe will be employed with understanding by medical science, which will be new because it is old..."
(The History of Magic, Eliphas Levi, quoted in The Secret Teachings of All Ages, Manly P Hall, pg. 43) 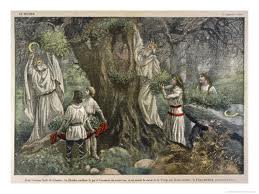 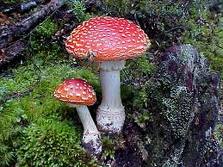 The possibility that the mistletoe was either used as hallucinogen, or as a symbolic substitute for one, is especially interesting when considering some of the more southern traditions surrounding December 25th and January 6th derived from ancient Greece. It was during this time the mythological beings known as Kallikantzari, gremlin-like creatures often associated with werewolves, were said to roam:

"The almost universal concept of the wolfman would directly connect the Kallikantzari to the Indo-European nexus that in Greece reveals itself in one of the earliest manifestations of Apollo. Even more intriguing, and less linguistically roundabout, would be the derivation of the word Kallikantzaros from a corruption of the purely Greek Lykanthropos, a term with impeccable Greek heritage which can be traced directly back to ancient Greece: the werewolf or wolfman whose appearance we would expect during the winter solstice.

"The Kallikantzari are essentially gremlins, little people with the legs of an ass (horse) or a goat. They are overall hairy and dark skinned; generally they are benign, but like leprechauns and other diminutive beings, can be sly and devious. While not exactly evil, they have several rapine qualities: they love to dance (to ecstasy) and are extremely sexual. If given the opportunity, they will carry off human women to their caves during the twelve days they are allowed to emerge from the bowels of the earth: the days between Christmas (December 25th) and Epiphany (January 6th)."
(The Apples of Apollo, Carl Ruck, Blaise Daniel Staples, Clark Heinrich, pgs. 38-39)

The dating is especially interesting for January 6th was the original date of Christmas before being moved twelve days back to the 25th of December. 12 is of course the number of months as well the signs of the Zodiac so presumably this period would be symbolic of the sun's yearly course after its 'rebirth' on the 25th.

The excesses of the Kallikantzari during their leave reminds me of the ancient festivals of Saturnalia and those dedicated to Bacchus that were characterized by their license. It has been widely speculated that the Mysteries of Bacchus included the ingestion of entheogens, likely mushrooms, or possibly some form of ergot. 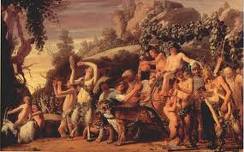 The werewolf, a shapeshifter to whom the Kallikantzari are associated with, has also been linked to entheogen use. Some have speculated that the werewolf myths of antiquity and Medieval Europe emerged from the accidental ingest of hallucinogenic substances and the visions that followed. I suspect that they have an origin in the Mysteries. It was not uncommon for the priests of the Mystery Schools to attire themselves in elaborate costumes depicting themselves as animals or mythological beasts. A lion or leopard skin was often used by Egyptian priests for instance. Shamans the world over have similar customs. 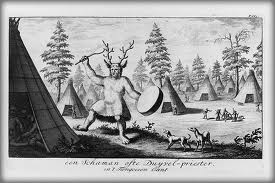 Certainly a wolfskin would not have been out of the question, especially in Europe where the wolf played a larger role in mythology, e.g. the Fenrir, a monstrous wolf that consumed Odin. 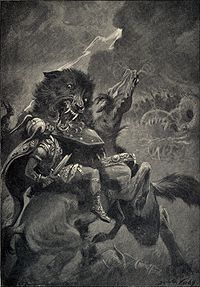 Then there's the symbolic aspects of the werewolf as man allowing his animal instincts to rise to the surface. Intoxication can bring on this transformation -Bacchus, the god of wine, is often depicted as being followed around by half-man/half-animal beings such as centaurs and satyrs for this reason.

Is the werewolf, then, symbolic of man in the grip of an entheogen? Is the transformation a shifting of the human spirit into that of the animal, rather than a physical one? Could the werewolf have become associated with the full moon and a scheduled transformation because this is when entheogens were used as part of a religious ceremony? 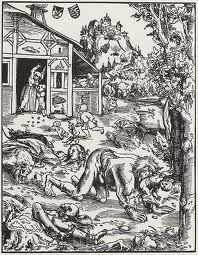 What then are we to make of the period from the winter solstice of December 25th till January 6th? Is it possible that the myth of the Kallikantzari and the association of mistletoe with Christmas stretch back to a time when entheogens were ingested ceremonially on these dates, or for the entire 12 day period?

If so, it would surely put the 'true' meaning of Christmas in a whole new light... 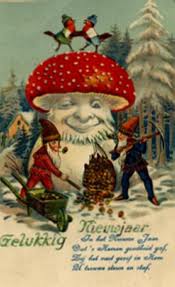