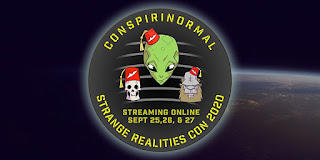 Apologies for the lack of new content of late. The good news is that much of the time I would have formally been investing in this blog has been put towards many new and exciting projects. First up is the great Conspirinormal's second annual Strange Realities Conference, which I will be a speaker. The title of my presentation is "Among the Cybermen: The Secret History of Conspiratainment." It will explore the notion of conspiracy theories as an MK-ULTRA subproject run amok.

For more on other guests and topics that will be discussed at the Con, check out this week's episode of The Farm. The Conspirinormal guys and I discuss not only the Con, but a host of other topics: Our hot take on the death of Supreme Court Justice Ruth Bader Ginsburg; all kinds of suspect "suicides," such as those of James Forrestal, Robert Maxwell, Epstein, and many others; the strange history of synchromysticism; and a few other odds and sods.

Elsewhere, the Penny Royal podcast will be premiering on October 21. The Penny Royals guys showed up in the second season of Hellier and have been regular guests on The Farm (most recently here with the great Christopher Knowles of The Secret Sun). I've been helping them with Penny Royal and I have no doubt the results will be fascinating. He's the official trailer:

Bonus factoid: I was riding shotgun in the car for that clip.