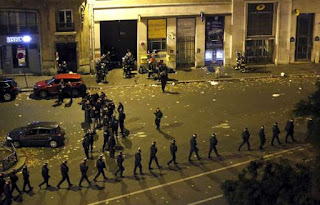 Note: Updates have been added at the bottom of the original article.


November 13, 2015 witnessed a series of horrific terror attacks around Paris that have left possibly over a hundred people dead and scores more wounded. This is potentially the third major terror attack to unfold in just a little over a month. On October 10, 2015, two bombs were detonated in the Turkish capital of Ankara during a peace rally primarily backed by the nation's Kurdish minority that left some 102 people dead. Then, on October 31, a Russian passenger plane known as Metrojet Flight 9268 crashed in the Sinai Peninsula in Egypt. Over 200 people were left dead.

The Russian incident is still under investigation, but there is mounting evidence of a bomb exploding in the plane. A branch of ISIS has reportedly claimed responsibility for the crash. As many conspiracy websites have noted, this incident occurred on Halloween. There is no dispute that the Turkish incident was a terror attack and there has also been a push to link this attack to ISIS despite targeting Kurds, an ongoing thorn in the side of Turkish national interests (as well as a dedicated advisory of ISIS).

The bombing also aided the controversial reign of Prime Minister (and alleged NATO puppet) Recep Tayyip Erdogan. It is interesting to note that there is growing evidence that Turkey is itself a major backer of ISIS. And of course, there are those pesky rumors that ISIS is simply an extension of Operation Gladio, sometimes referred to as "B." The previous link also notes the curious occurrence of terror attacks in France and Turkey toward the end of last year/beginning of this year as well (hint, one was the Charlie Hedbo shooting spree, which occurred fairly close geographically to the present attacks).

These latest incidents occurred on Friday the 13th, a date supposedly notorious due to the fact that the Knights Templars were officially suppressed on October 13, 1307 by King Philip IV. No doubt this will have the blogosphere buzzing as will early indications that the attackers may have been Muslims. If this is in fact the case, this could be a tipping point for Europe. Already the EU is overburdened with the migrant crisis (driven in no small part by American imperial aspirations) and there is already much suspicion that ISIS assets have been smuggled in with the migrants in mass. Already Europe's resurgent far right has made many gains via the migrant crisis and this may be the attack to push things into the black. 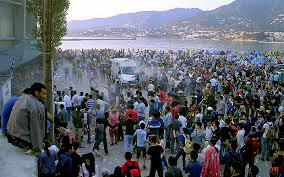 Of course, there is also much speculation that the US intelligence community assisted in the creation of ISIS. In going down this path, we are confronted with the specter of the US, via a revamped Gladio operation, instituting another Years of Lead on a global scale. Giving the growing instability in the world, especially the conflicts in Ukraine and Syria as well as the saber rattling in the South China Sea, this possibility carries a high probability for those who have studied Gladio.

On a personal note, this researcher finds it down right surreal that the rock band potentially involved in the Paris terror spree was the Eagles of Death Metal. This group was cofounded by Josh Homme, most well known for his work with Queens of the Stone Age, but whose work with the earlier Kyuss has long fascinated this researcher. Losing a visionary like Homme who was essential in creating the legendary Palm Desert scene would be further salt in the wound.

And of course, this would have been my father's eightieth birth day if he had lived to see it. These truly strange times we're living in indeed. Stay tuned dear readers for more updates as more information becomes available.

In an announcement that should surprise absolutely no one, ISIS has in fact be credited with the attacks, of which there six separate initiated at the same in Paris last night. Apparently there were eight perpetrators, all of whom are now allegedly dead. Presently the death count stands at 127, though the number has been projected as 150 at some points. Naturally, France has declared a state of emergency, the most rigid and far reaching since the attempted coup against de Gaulle in 1961.

There are also some interesting esoteric aspects to the date of November 13th involving the Egyptian god Osiris and his wife/sister Isis (har har), which I've addressed before here.

The Eagles of Death Metal all survived the attack while Josh Homme himself was not touring with the group at the time. Their merch manager, however, lost his life. As someone who has attended plenty of shows featuring this type of music over the years, it deeply saddens me that the comradely and good vibrations this type of music inspires live could end in such bloodshed.

On a more serious note (har har), it has been reported that a passport allegedly identifying one of the attackers as a Syrian refugee has reportedly been found. Of course, many are already pointing out how terribly convenient it is that an almost fully intact passport would be found amongst such chaos...

It is also interesting to note that CIA director John O. Brennan met with his French counterpart shortly before the attacks. It has also been reported that French security services had been planning a drill involving terror attacks at multiple sites shortly before the actual attacks began. How fortunate...