Echoes of the San Bernardino Working? 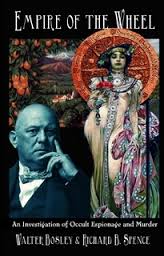 Another day, another mass shooting in these United States. Apparently the one that unfolded on December 2, 2015, was the deadliest in this nation since 2012's Sandy Hook shooting. The December 2nd incident unfolded in San Bernardino, CA, at the Inland Regional Center.

When it was all said and done, fourteen unfortunate souls lost their lives while an additional 17 were wounded. The alleged shooters were a husband and wife duo known as Syed Rizwan Farook, 28, and twenty-seven year old Tashfeen Malik. Both Farook and Malik were Pakistani, according to the present reports. Farook was a US citizen born in the state of Illinois while Malik was here on a visa, having apparently come to the United States with Farook after he had been traveling overseas over a year ago. 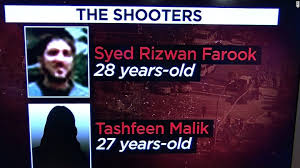 The specter of terrorism has already been raised due to Mr. Farook's company and travels in additional to how he met Mrs. Malik. MSNBC reports:


"Mr. Farook, a United States citizen, was born in Illinois to Pakistani immigrant parents. Family members said he had been a devout Sunni Muslim, and on a dating website several years ago, he listed Urdu as his mother tongue. He had gone to Saudi Arabia multiple times, including a 2013 trip for the annual hajj, the trip to Mecca that all Muslims are expected to complete at least once, federal officials said.

"Mr. Bowdich said that Mr. Farook visited Pakistan last year, and that he and Ms. Malik entered the United States from Pakistan in July 2014. She traveled on a Pakistani passport and entered the United States on a K-1 visa, a 90-day visa given to fiancés planning to marry Americans. The couple applied on Sept. 30, 2014, for a permanent resident green card for Ms. Malik, which requires passing pass criminal and national security background checks using F.B.I. and Department of Homeland Security databases, and she was granted a conditional green card in July 2015."

The same article implies Mr. Farook may have also been in contact with radicals:


"The F.B.I. has begun treating its inquiry as a counterterrorism investigation, two law enforcement officials said Thursday. The suspects’ extensive arsenal, their recent Middle East travels and evidence that one had been in touch with people with Islamist extremist views, both in the United States and abroad, all contributed to the decision to refocus the investigation."

No doubt this will send most researchers scrambling for more Saudi links, though these avenues are becoming increasingly dated.

While the Saudis have given ample backing to Sunni extremists (the branch of Islam both Farook and Malik adhered too) over the years, they have become increasingly alienated from these factions in recent years. Indeed the Kingdom, at least publicly, had a full on break with the Muslim Brotherhood (the chief backers of Sunni extremism for decades) this past year. US foreign policy has played a key role in this break.


"All these recent developments are especially disconcerting because of the visible deterioration of governmental relations between Washington and the Gulf states, and the emergence of strong disagreements concerning the Muslim Brotherhood and the future of the region between the Gulf states themselves, particularly Saudi Arabia and Qater.

"Saudi-U.S. relations frayed after the Bush administration's adoption of the neocon agenda of change in the Middle East, particularly by the plans, which King Abdullah publicly oppose, for an Iraqi war in 2003 to topple Saddam Hussein...

Indeed, Turkey has emerged as a major backer of ISIS, as Russia has made abundantly clear during the past week.  Turkey is of course in the midst of controversy after it downed a Russian jet towards the end of November after it allegedly violated Turkish air space. Interestingly, Turkey has recently approached Pakistan for help in its war against ISIS and Kurdish guerrilla group PKK (of which the bulk of Turkey's military actions have been geared towards).

No doubt much will be made about the possible links to Pakistan and Saudi Arabia in the coming weeks in regards to Farook and Malil's possible radicalism, but this researcher believes a probe of possible Turkish contacts would be far more revealing.

Ultimately, to little evidence is available to judge the true nature of this event in depe political context at present.

There are, however, some striking synchronicistic associations to the shooting spree that I would now like to address. These largely relate to a series of books that first began to be released in 2011 by former FBI and Air Force Office of Special Investigations (AFOSI) agent Walter Bosley dubbed Empire of the Wheel. This researcher finds this series, which presently stands at three parts, rather dubious as well as the background of the writer.

As to the former, Bosley is knee deep in numerous Communistic-Masonic-NWO conspiracy theories, many of them dated as well as overly dependent on the research of his associate, Joseph P. Farrell, whose researcher on post-WWII Nazism at times borders on high camp. As to Bosley's background, this researcher will remind the reader of this researcher's chronicles of "former" FBI agents (such as here and here) who ran roughshod over the conspiratorial right for decades. The AFOSI has had a go at alternative researchers a time or two as well, especially in one spectacular instance chronicled on this blog before here and here.

So yes, Bosley's premise should be taken with a massive heaping of salt. Indeed, I am tempted to reject it outright had he not stumbled over several compelling threads concerning German WWI intelligence activities that correlated with research of my own. Presently, my view is that Bosely's take is badly mired by dubious sources, but may in fact have a basis in reality.

As to that premise, here is a brief rundown: Bosley became interested in a series of curious murders and suicides that unfolded in San Bernardino in 1915. Two deaths involved children who had been given poisoned candy while another was a suicide involving an enigmatic drifter who displayed his body in his Masonic regalia. Bosley essentially argues that these deaths were both related to WWI espionage activities as well as the dreaded occult ritual murder. Over the course of the series many of the usual suspects have made appearances: Aleister Crowley and the O.T.O, the Masons, Fabian Socialists, the Zodiac killer, Theosophists, H.P. Lovecraft, Spiritualists, UFOs, ley lines and even some of the lesser traveled paths such as Houdini and the mysterious Sonora Air Club (which some researchers have linked to the 1897 air ship mystery sightings).

Properly addressing all of these threads and there varying degrees of legitimacy and probability are vastly beyond the scope of this present article so lets us focus on the foundation of Bosley's theory: that in 1915 a series of ritual murders (some of them labeled as murders, others as suicides) unfolded in and around San Bernardino at sites near telluric currents, which in occult traditions have long been mistakenly identified as ley lines (of which this blog has covered before here).


"... two of the lines passing through Disneyland continuing north and eastward into the Inland Empire. These lines pass within less than ten miles of downtown San Bernardino. A third line, emanating from another set of spiraling lines, passes along what used to be called Route 66, the legendary national highway. The ley energy that flows west-east along old Route 66 follows the road right into town along Fifth Street, bisecting the city with its energy path.

"If one accepts the notion of ley energy, the entire San Bernardino area is full of it, so to speak... an entire system of ley energy winds and loops throughout San Bernardino and neighboring areas. The main nodal point of power is to be found in the heart of our mystery: Urbita Springs Park...

"... we propose that the perpetrator(s) of the deaths we suspect for murders were influenced by a belief in such a ley (telluric) power grid. Thus, we suggest Cora Stanton met her fate literally yards from what the perpetrator(s) believed was a ley nodal point. Their purpose was to prime the pump, so to speak, with the life energy of the victims to get the power grid going and serve their aim."


As for the current tragedy that unfolded in San Bernadino on December 2, 2015, it occurred at the Inland Regional Center. What Bosley believed was the key murder in what he dubbed the "San Bernardino Working" unfolded at a location known as Urbita Springs Park where the body of a mysterious woman known as Cora Stanton was found. Today the Inland Center Mall stands in the location of the former park. Inland Regional Center is only about two miles or less from the Inland Center Mall.


What's more, Farook and Malik met their ends during a shoot out with police in the nearby suburb of Redlands. Redlands also hosted several of the 1915 murder/suicides Bosley proposes. He notes:


"Orta Hedges died in Redlands, also crossed by leys and reputedly one of the most haunted towns in America known for rumors of devil worship as well as plentiful ghost stories. Her home sat upon an intersection of two telluric 'leys'.

"Likewise, the allegedly tormented E. P. Braid took his life in Redlands – his place of death also on the intersection of two such lines. Both telluric intersections where Hedges and Braid died included such lines following directly from the major nodal point in Urbita Springs Park." 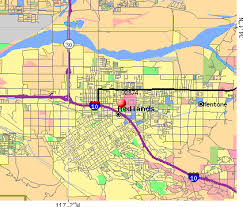 One final synch that with Empire: Bosley believes that the Urbita Sprigs Park victim, known to posterity as Cora Stanton, was in fact the notorious Etta Place, the companion of Old West outlaws Butch Cassidy and the Sundance Kid! It has long been speculated Place was married to Sundance (a notion Bosley dismisses), thus potentially giving us another armed husband and wife duo wondering around San Bernardino a century ago.

And with that I shall wrap up for now. If more compelling information turns up I shall weigh in. Until then dear readers.