Some interesting synchronicities are emerging in America's latest school shooting tragedy. But first, the incident:

"In a stunning incident caught on video, a school board chairman calmly told a gunman Tuesday that he was probably responsible for firing the man's wife and another board member tried to disarm the man with her handbag before he opened fire.

"The gunman, ex-convict Clay A. Duke, fired point-blank at school board members but missed. He was wounded by a security guard and then fatally shot himself."

The man's name immediately stands out to me. In the Middle Ages a Duke was typically the highest ranking member of the nobility, after the monarchy. The word Duke derives from the Rome word Dux, which initially referred to a (typically foreign) military officer without an official rank, and later the military commander of an entire province. In other words, a warlord. Oddly, Dux is pronounced similar to 'duck.' 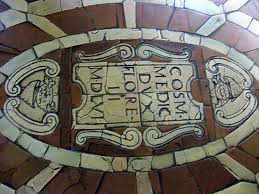 A clay Duke sounds like a phrase for a false nobleman, or warrior, as well as being a play of clay ducks, which are fired upon for target practice. Very ironic, given that Duke's aim didn't seem especially good.

Or was he meant to miss?

Duke, like many spree shooters, serial killers, assassins, and so forth, also had a criminal record with strong hints of mental illness. Continuing with the MSNBC article:

"Duke was charged in October 1999 with aggravated stalking, shooting or throwing a missile into a building or vehicle and obstructing justice, according to state records.

"He was convicted and sentenced in January 2000 to five years in prison and was released in January 2004.
"Attorney Ben Bollinger, who represented Duke during his trial, told The News Herald of Panama City that Duke was waiting in the woods for his wife with a rifle, wearing a mask and a bulletproof vest.
"She confronted him and then tried to leave in a vehicle, and Duke shot the tires. He said that as part of his sentence, Duke was required to complete psychological counseling. Bollinger did not immediately return a phone message from the AP."

The psychologist must have liked what they heard. They would, of course, hardly be the first such panel to release an individual such as Mr. Duke back into the world. In fact, they seem to do it with shocking consistency. I noted this trend while commenting on another bizarre instance of a clearly deranged person being released with tragic results that can be viewed here.

It's also interesting to note that Mr. Duke claimed to be seeking revenge for his wife being laid off by the school board, presumably the same woman he waited in ambush for in 2000. This sounds very sketchy.

But what's really interesting about this incident is the odd synchs it shares with the whole Julian Assange flap. The most obvious meme is the V for Vendetta symbolism Duke embraced:

"The gunman had for much of the meeting sat with the rest of the audience, listening to routine business. As the board was in the midst of a discussion , Duke walked to the front of the room, spray painted a red 'V' with a circle around it on the white wall, then turned and waved a handgun...

"As for the V inside a circle that Duke painted, it's the same symbol used in the graphic novel series and movie 'V for Vendetta,' though police didn't talk about his motive."

This is consistent with the V for Vendetta meme many of the 'hactivists' of Operation Payback have been using. 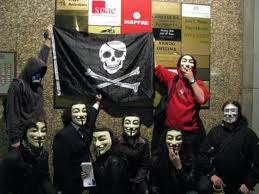 Even more oddly, Duke seemed to begin laying the framework for his assault the day Assange was arrested:

"On a Facebook page under Duke's name, which was apparently created Dec. 7, he left a cryptic message under the 'About Me' section.

"'My testament: Some people (the government sponsored media) will say I was evil, a monster (V) ... no ... I was just born poor in a country where the Wealthy manipulate, use, abuse, and economically enslave 95 percent of the population. Rich Republicans, Rich Democrats ... same-same ... rich ... they take turns fleecing us ... our few dollars ... pyramiding the wealth for themselves.'
"The Facebook page's profile picture shows the same red V symbol that was spray-painted on the wall during the school board meeting."

Well, at least Mr. Duke lived up to his name in his fight against the Cryptocracy.

As to whether or not this event was deliberate, it's difficult to say. With all the 'anarchists' memes floating around out there over the WikiLeaks flap unstable individuals are inevitably going to be effected. Mr. Duke clearly seems to fall into the category. On the other hand, he would hardly be the first person to emerge form prison a changed individual after undergoing personality modifications. What I find to be especially odd is that Mr. Duke failed to hit anyone despite firing multiple shots in a relatively small space.

Was this simply an elaborate suicide attempt that also 'made a statement' and he never had any real intention of hurting other peoples?

Or was he struggling against some kind of programming in an attempt to not harm others?
Posted by Recluse at 10:57 AM