I stumbled upon this striking case a few nights ago while doing some other research:

"Luke Armstrong thought his mother was the devil, “who had to die for mankind.”

"On the night of April 30, 2010, the trouble 18-year-old Caledon high school student repeatedly stabbed Krystina to death while driving his Jetta — and then nearly decapitated her afterwards...

"Krystina had been stabbed more than 100 times, including 26 wounds to her face, 12 to the back of her neck, 11 to her chest and five to her abdomen. There were also 13 defensive wounds to her right hand." 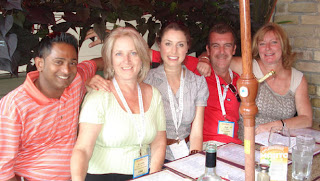 As startling as this murder may seem the sentencing of Armstrong, which occurred a few days ago, may go down as then even greater act of madness:

"On Friday, Justice Bruce Durno accepted Armstrong’s plea of being not criminally responsible to second-degree murder because he was suffering from a profound psychotic mental disorder at the time of the vicious and relentless attack."

Essentially he's being released on a temporary insanity plea. This is odd given that Mr. Armstrong demonstrated violent tendencies well before the actual murder -in fact, his parents may have been separated over the mother's unwillingness to discipline her son:

"Court heard how Krystina and George separated in 2007 after 13 years of marriage, partly over parenting issues involving their son's discipline. Krystina had just moved into a new home on the day of the tragedy.

"Armstrong had a history of violent outbursts, once breaking his mother’s finger during in a March 2009 in an argument over his lunch while she was driving.

"He was diagnosed with ADHD at 14. Had uncontrollable temper outbursts and had set fires."

I can't help of being reminded of one of the most notorious serial killer of the 20th century, Henry Lee Lucas, who was also inexplicably released early after killing his own mother:

"The first big break for Henry came in June 1970, when he was released early from a sentence he was then serving following his first murder conviction. Sentenced to 20-40 years, Henry was released after serving ten, just after he appeared before the parole board and explained to them that he was not ready to return to society and would surely kill again if released. As Henry told it, the question went something like this: 'Now, Mr. Lucas, I must ask you, if we grant you parole, will you kill again?' Henry: 'Yes sir! If you release me, I will kill again.'

"Nevertheless, the board decided that ten years was an adequate amount of time to serve for the crime of killing his mother."
(Programmed to Kill, David McGowan, pg. 73)

Good ole Henry was hardly the first budding serial murderer that received a shockingly early parole. He was also not the first ceral killer to warn the parole board that he would be up to no good if released either -Charles Manson had made a similar statement shortly before his release in the late '60s. I'm not aware if Mr. Armstrong made such a statement, but his release back into society after such a heinous crime that followed years of violent, telltale behavior is consistent with the lives of many high profile killers and assassins. 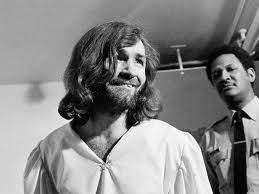 Researchers such as the previously sited McGowan or Alex Constantine have speculated that the early release of violent individuals is a deliberate policy of the US and other Western governments in attempt to terrorize their peoples. After all, individuals such as Manson and Henry Lee Lucas are often held up as examples of why tougher sentencing with less judicial oversight is necessary to keep violent criminals off the street. What's never explained is why there always seems to be some kind of loophole that allows the dregs to get out while countless non-violent offenders rot away.

Finally, there's the bizarre occult aspects of this crime. The most obvious would be that Mr. Armstrong saw his mother appear as some kind demon during the actual attack and had spoken about occult societies and such prior to the murder:

"During a ride with friends, he said he hated women and mumbled “everyone is in danger and “people are going to die.” He also talked about conspiracies and was acting paranoid.

"In the days before the tragedy, Armstrong asked his mother if he had been named after Lucifer and if she knew anything about the Illuminati, a rich and power full group that ruled the world." 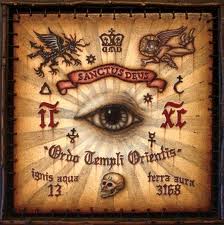 Why did he ask his mother if she knew anything about the Illuminati? I noted in the article that Mr. Armstrong had been diagnosed with ADHD which is a convenient way for the state to induce drug abuse at very early age to children. I suspect Armstrong was no different. There's also indications that Armstrong had a strained relationship with his family, but few details have been made public. I've known people from this type of background that developed psychological problems over the years -ADHD-induced drug use, frayed relationships with the parents, etc. Was Armstrong being groomed for some purpose of a nefarious nature? That may explain why there's shockingly little information out there about this case given the sensationalism of it. 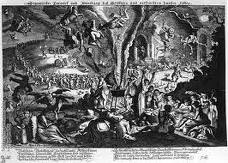 "The time when the witches are particularly dreaded is Walpurgis Night, but they play their pranks also on Midsummer Eve, St. Thomas's Eve, and Christmas Eve. On these days they try to make their way into a neighbour's house and to borrow or steal something from it; and woe betide the man in whose house they have succeeded in their nefarious errand! It is on Walpurgis Night and Midsummer Eve that they ride through the air astride pitchforks and churn-dashers. They also bewitch the cattle; so to protect the poor beasts from their hellish machinations the people on these days chalk up three crosses on the doors of the cattle-stalls or hang up St. John's Wort, marjoram, and so forth. Very often, too, the village youth turn out in a body and drive the witches away with the cracking of whips, the firing of guns, and the waving of burning besoms through the air, not to mention shouts and noises of all sorts."
(The Golden Bough, pg .574) 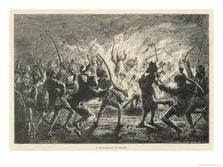 Frazer saw the Medieval Walpurgis festivals, which also frequently included massive boon fires in which witches (in the form of straw) were ceremonially burned, as being a variation of the ancient scapegoating ritual. Scapegoating was essentially the transference of evil, in which the 'sins' of the community were placed upon an animal or something such a strawman that was then punished. It's possible that in ancient times this scapegoating rite was performed with an actual human sacrifice, such as a condemned criminal, rather than with an animal or a strawman. In Mr. Armstrong's case, he murdered his mother, who he believed was some kind of demon, on Walpurgis night. 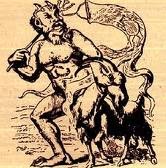 Finally, I would like to briefly mention the similarities between this case and the Michael Breas murder, which I already wrote extensively on here, that occurred this past November 23rd. 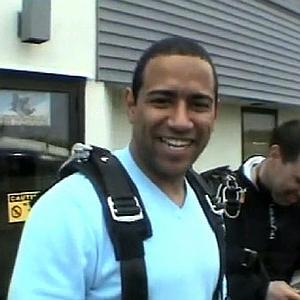 Most notably, both Breas and Armstrong seem to have envisioned their mothers as the devil. Breas stated:

"When I looked at my mother, I saw the devil."

Armstrong had a similar response when he was arrested:

"Is she dead? She’s the devil...,” Armstrong told the officer. “She tried to stab me. I killed the devil.” 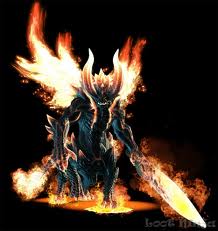 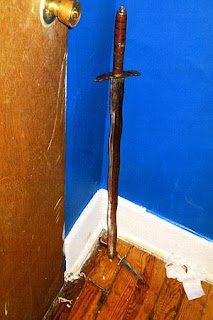 Both men repeatedly stabbed their mothers, then inflicted numerous wounds around the head that may have been an attempt to decapitate them. In Masonry, decapitation is used as a ritualistic form of death. I've written on this before here. Both men also were engaged in rants about secret societies, Armstrong before the killing, Breas during. Armstrong's murder occurred on an extremely important occult date while Breas murder occurred just over an hour after November 22nd ended, the date JFK was assassinated, which some researchers believe was a highly ritualistic assassination.
So, what do these two events mean? Is Breas merely some kind of copycat? Was he overwhelmed by the synchronicity of it all? Or were Armstrong and Breas groomed by the same people toward the same ends? Are Armstrong and Breas nothing more than this year's model of an assassin certain factions have been trying to perfect for a very long time? 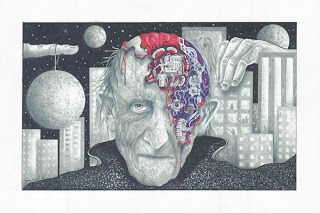