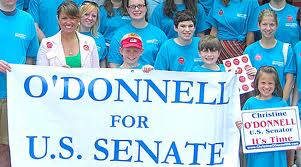 The candidate in question, a miss Christine O'Donnell, is one of numerous contradictions. Her public persona has been one of fierce Christian values (especially in regardless to abortion, abstinence, and apparently masturbation), a staunch defender of free market capitalism, and an even stauncher opponent of welfare entitlements and Congressional earmarks. The later is especially odd given that much of her career has been spent as a professional lobbyist. Presumably she doesn't consider a tithe to be an earmark. She also defaulted on her home mortgage in 2008 and attempted to sue her former employers at the Intercollegiate Studies Institute for gender discrimination on the basis that they expected women to be subordinate to men and had demoted her because of this. In the lawsuit she also claimed that ISI had caused her mental anguish because of their 'conservative beliefs.'

Now reports are coming out that this family values champion also dabbled in witchcraft as teenager before returning to the religion of her childhood as a college student. Apparently this childhood fling included a midnight 'picnic' (intercourse?) with a witch/boyfriend upon a blood stained Satanic alter. 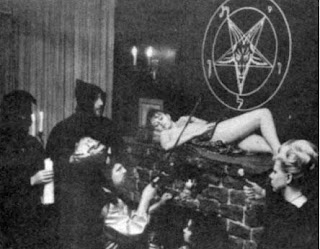 It's tempting to chalk up Miss O'Donnell's adult beliefs to some kind of childhood sexual trauma, which she likely experienced. I also can't help but be struck by the shades of the 'Franklin scandal' in which numerous high profile pedophiles and suspected occultists hid behind the public facade of Catholicism/Evangelicalism and conservatism all the while molesting children in a ritualistic fashion.

Could Miss O'Donnell be one of these 'Manchurian Candidate' we've heard about over the years, with their overt personalities masking a nefarious multiple, created through years of systematic abuse, and now awaiting its chance to 'take charge'? I tend to suspect that Miss O'Donnell is probably nothing more than a buffoon though she's demonstrating a remarkable ability to engage in what psychologist refer to as 'doubling', eg performing actions that are in stark contrast to the individual's belief system without ever being aware of the contradictions.

What is shocking is the incredible speed with which the 'revelation of method' continues to persist at...
Posted by Recluse at 3:44 PM