At Her Majesty's Service 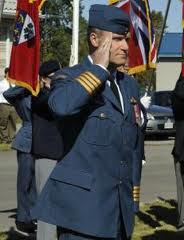 This afternoon it was acknowledged that a Col. Russell Williams, who had been the commander of Canada's largest Air Force Base, was also moonlighting as a serial murderer:

"The lawyer for a military commander who flew Queen Elizabeth II and other dignitaries around Canada said Thursday his client will plead guilty to murder, sexual assaults and dozens of breaking and entering charges.

"Col. Russell Williams was the commander of Canada's largest Air Force base until he was charged earlier this year with the murder of two women, the sexual assault of two others and 82 break-ins, during which he stole women's panties.

"Michael Edelson, Williams' lawyer, told a judge at a hearing Thursday that Williams intends to plead guilty to all the charges at his next court appearance on Oct. 18. Williams appeared at the hearing but did not speak."

As bizarre as this may appear, the confessed killings seem to only scratch the surface of Williams' duplicity. Prior to his assignment as CO of CFB Trenton Williams he was the commanding officer of Camp Mirage, an ultra secret 'forward logistics' base situated somewhere in Dubai. Both its actual location and mission(s) are unknown. It has been widely speculated online that it's a hub for sabotage, assassinations and other black opts performed by Canadian forces and a few other nations that operate out of it in the name of 'War on Terror'.

But that's not even the weirdest aspect of Williams' past.

That honor has to fall to his relationship with notorious Canadian serial killer Paul Bernardo. Bernardo, who had rapped dozens of women before escalating to the next level, was convicted of killing three women with the aid of his fiancé, Karla Homolka. One of their victims was Tammy Homolka, the 15 year old sister of Karla. Karla offered her younger sister's virginity to her husband-to-be one night as a kind of wedding present (apparently Bernardo was miffed Karla hasn't saved herself for him). Things apparently got out of hand. Sadly, it would only be the beginning as (at least) two other women were killed in the aftermath of Tammy. Karla, who seems to have come from a well-to-do family (as did Bernardo), got off rather easily with a mere 12 year sentence climaxing in her release in 2005 despite video evidence showing that she was heavily involved in the killings. She had apparently helped feed Bernardo's rapist appetite, setting him up with several of his victims before they escalated their relationship. 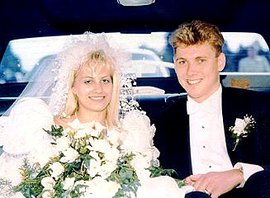 Now reports are coming out that Bernardo and Col Williams were friends in the mid-1980s while both were attending the University of Toronto together. Apparently they graduated and 'partied' together.
One can't help but wonder what kind of 'partying' this was as Bernardo begun his hobby of serial rape in 1987, the year he graduated and met Karla Homolka. Further, one can't help but wonder what kind of assignments the Canadian Forces sent a man with such appetites on. I half-jokingly speculated yesterday if Christine O'Donnell could possibly be one of the CIA's famed 'Manchurian Candidates', but clearly if ever there was a man that fit the profile of a programmed assassin, it would surely be Col. Russell Williams.
Posted by Recluse at 8:44 PM