There's a Riot Going On 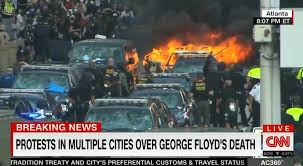 Among the many topics covered in my debut book Strange Tales of the Parapolitical is the origins of the so-called "strategy of tension," allegedly developed by Italian neo-fascists during the mid-1960s. This concept held that terrorism could by used to systematically destabilize civil society, thus paving the war for military intervention. Such a state of affairs would in turn provide a favorable climate for a fascist revival.

However, the strategy of tension was largely lifted wholesale from the French counterinsurgency (COIN) doctrine known as "le guerre revolutionnaire," or "revolutionary warfare." This doctrine was based upon the guerrilla warfare of Mao Zedong combined with the France's own experiences confronting it in the French-Indochina War. It was rolled out in full with brutal effectiveness during the Algerian War.

The French military fared much better in this conflict than the prior one in Indochina, but the methods employed by the psychological warfare officer and special operators were so brutal that the war rapidly lost support among the French public. When de Gaule opted to concede Algeria after he returned to power, this triggered a revolt by the same sections of the French military. De Gaule was able to rally the nation and stop the revolt in its tracks. But many of perpetrators, highly trained soldiers, would carry on the struggle for years to come via underground paramilitary networks. Initially the Organisation armée secrète (OAS: Secret Army Organization) was the vehicle of choice, but it was largely dismantled by 1963. 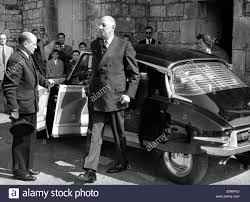 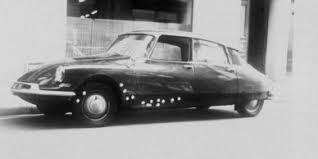 From there, the OAS veterans would look to various neo-fascists across Europe to regroup and found new networks. Easily the most "successful" of these OAS successors was the Lisbon-based Aginter Press. Aginter maintained ties to the Portuguese secret services, and reportedly a few other ones. More importantly, it established ties across the black underground and became one of the principal linchpins in the network during the late 1960s and early 1970s. Aginter became especially close to the Italian neo-fascists and almost surely provided the ideological foundation of the "strategy of tension."

Given the current situation unfolding in the US, Aginter warrants a closer look. While its paramilitary efforts, often linked to terrorism across Europe, Africa, and later Latin America, draw much of the attention from researchers, its important to remember that the institution was actually a fully functioning press service as well. Indeed, psychological warfare was a crucial component of le guerre revolutionnaire. Often the French, and later the Aginter "press associates," would refer to psywar as "intoxication operations." The French concept of "intoxication" was much different in this context, however:


".... The French term intoxication, which in general means 'poisoning,' is used by... guerre revolutionnaire proponents to refer to the 'poisoning' of the mind. Specifically, it signifies the manipulation of the political environment by means of the systematic dissemination of false or misleading information to a targeted group (or groups), the purpose of which is to paralyze or otherwise influence that group's subsequent actions. The targeted group can be relatively small or encompass an entire society..."

A specialty of Aginter was the intoxication of revolutionary leftist groups. Often, they sought to push them towards violent action, such as at protests. At times, if Aginter could not find a suitably militant group, they would create one.


"Perhaps even more importantly, 'the infiltration of pro-Chinese [Maoist] organizations and the use of this [leftists] cover was one of the great specialties of Aginter.' Such methods were explicitly advocated by Guillou in his terrorist manual. In the section on violent demonstrations, for example, the former OAS man recommended that 'the infiltrators at a demonstrations should situate themselves strategically within the midst of it in order to cause it to disintegrate.' From this choice position, 'they can carry out violent provocations against the forces of order, thereby inciting the cycle of action-repression-reaction.' In the section on covert operations, he insisted that selected personnel should scrupulously observe the rules of 'cover' by adopting false identities as journalists, identities that could be lent credence through the use of skillfully forged documents or genuine documents that had been surreptitiously acquired. Although Guillou and Leroy both later denied – vehemently but seemingly falsely – that they had anything to do with terrorist atrocities, the latter openly bragged about the agency's success in carrying out infiltrations and provocations. His evident pride in these accomplishments was hardly misplaced. At the end of 1965, even before the creation of Aginter, Guillou and his men commenced operations in Portuguese Africa with the objective of liquidating guerrilla leaders, installing informants and provocateurs in genuine resistance groups, and setting up false national liberation movements that were roughly analogous to the pseudo-Mau Mau 'countergangs' that British Brigadier General Frank Kitson had earlier formed in Kenya."

With all of this in mind, let us now turn our attention to contemporary events. Certainly, they have been something to behold over the last few days. But let's turn the clock back a bit further.

From Mind War to the Q Collective

A few weeks ago, I did one of the The Farm's best ever shows with my esteemed research assistant Keith Allen Dennis on the topic of "fourth-generation warfare," which is in and of itself largely a variation on le guerre revolutionnaire. As the show drew towards its conclusion, concern was expressed over the rise of armed protests at various state capitals (but especially Michigan's) in various Blue States. I later expanded upon that fear in a recent post.

Since then, there has been some sign that "respectable" news outlets" are catching up to us. The QAnon phenomenon has been especially fascinating to observe during the COVID lock-downs. The general narrative promoted by QAnon is that they are a group of military intelligence officers helping the Orange One take down a cabal of Satanic pedophiles whom rule these United States and the world beyond. Bizarrely, the ties to military intelligence were "confirmed" late last year by General Paul E. Vallely. Regular readers of this blog are no doubt familiar with a curious tract Vallely co-authored back in the early 1980s entitled From PSYOP to MindWar: The Psychology of Victory. His co-author was none other than Colonel Michael Aquino, the longtime military psywar officer and founder of the Temple of Set.

Ever since the Presidio child abuse scandal unfolded in 1987, Aquino has been described by conspiracy theorists as being at the heart of a Satanic pedophile ring in the national security establishment. Former CIA officer and Phoenix veteran John DeCamp once wrote: "Aquino... was long the leader of an Army psychological warfare section which drew on his 'expertise' and personal practices in brainwashing, Satanism, Nazism, homosexual pedophilia, and murder" (The Franklin Cover-Up, p. 328).

And here's Aquino's old buddy Paul E. Vallely endorsing the group allegedly behind QAnon. Did Vallely have a change of heart? Probably not, especially if you've followed his post-military career with outfits like the Center for Security Policy, the most hard line of neo-con think tanks. I suspect Vallely and Aquino still see eye to eye and are engaged in dark projects. How much stock one puts in the claims of Aquino as a pedophile is certainly a matter of debate, but there is no question he is a long term psychological warfare officer, and one credited with revolutionary developments in the medium. These implications are so blatant now that even the Daily Grail is able to put it together (but tongue firmly in-cheek, of course):

"What if there is a secret, far-right group consisting of an association of white supremacists, Nazis, mobbed up millionaires, and generally fascist-leaning RWNJs – and QAnon is a psy-op they created to build an army of useful idiots, who would help spread their message so that eventually a portion of the population would be compliant when the American putsch goes down?" 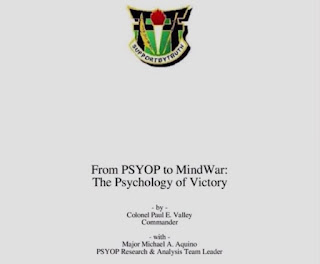 What if indeed. And this was written when the overriding concern of the militia/QAnon crowds were the lock-downs (which may or may not have been initiated by Trump to start the process of rounding up the Satanic pedophiles). Now they're faced with the scary prospect of African-Americans rioting across the country and generally launching an assault on their beloved "law and order."

Of course, as the great Christopher Knowles has astutely pointed out, this is all following a very tried and true script in which peaceful protests by African-Americans turn violent after black-clad, largely white "activists" make the scene and start turning things violent. This script is so tried and true at this point that the public at large was not buying it initially, with some sharp observers pointing out that the riots may have been started by an undercover cop. Naturally, Zero Hedge soon jumped in to blame the whole thing on "the far left or anarchist," based on the claims of a former British counterintelligence officer and current private contractor no less.

Not to be undone, Attorney General William Barr recently weighed in, and came to the same far left/anarchist conclusion. It apparently wasn't enough for the Orange One, who felt that the time was right to suggest that his followers rally at the recently besieged White House as a counterbalance to left wing protesters. That should be really interesting.

All of this comes against the backdrop of some even more interesting actions taken by the Orange One of late, such as his decision to expel Chinese students linked to that nation's military. Or his executive order targeting social media just in time for the 2020 election. Or the fact that he formally started the process of terminating the US's membership in the World Health Organization. The latter is a major geopolitical event that has received almost no media coverage here in the US and very little push back thus far from the globalist faction of the US elite. Is it perhaps because their urban strongholds are presently in flames in these United States? And all against the backdrop of continuity of government (COG) operations going live due to the COVID?

Whether some type of Satanic cult exists at the heart of the national security establishment is debatable, to put it mildly. What is not is the Cult of Counterinsurgency, which the great Douglas Valentine recently warned against in an interview with yours truly.

Let us then return to Aginter now, which was very much an offshoot of the French COIN doctrine known as le guerre revolutionnaire. As Strange Tales of the Parapolitical makes clear, this doctrine was embraced wholeheartedly by the US Military as far back as Vietnam and was enormously influential on the Phoenix Program. Recently, it has enjoyed a vigorous resurgence was the Global War on Terror. And wouldn't you know it, Colonel Michael Aquino is not just a longtime psywar officer, but a Phoenix veteran as well (who was accused of Satanic pedophilia by fellow Phoenix vet John DeCamp no less). And his old buddy and Mind Wars co-author Paul E. Vallely is a proponent of the Q (and apparently willing to lead a coup, but only if called upon of course).

There's a riot going on indeed. And I for one do not think it has very much to do with driving pedophiles out of the deep state, but may well play into a nefarious, decades-spanning agenda rooted in MK-ULTRA no less. It just not the one you've ever heard of, but one addressed in my most recent book and forthcoming work that will hopefully be out by the end of summer. Until then dear readers, stay tuned until next time. 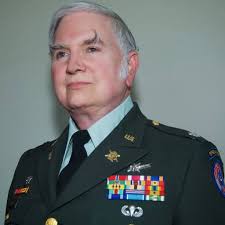