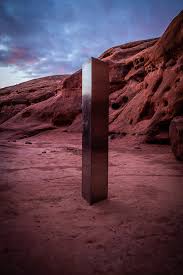 Well, it looks like the mystery has already deepened. Just a little over a week after this would-be artifact was revealed to the public at large, the monolith has just as suddenly disappeared. This certainly makes for one of the stranger series of events in 2020, which is saying something. Or is this the end of the Utah monolith? As is discussed below, there is a lot of highly charged twilight language surrounding this whole psycho-drama.

So, 2020 still has a little over a month to go. What else could this especially foul year of Our Lord have in store for us? Naturally, this past week has produced two additional gems, one a bit twee, the other not so much.

Let's start with the former. As I'm sure you're all aware by now, a monolith has appeared in Utah. I've become quite fascinated with Utah of late and consider Stanley Kubrick to be my all time favorite filmmaker, so this development had quite a personal significance for me. But beyond that, the monolith also has a lot of synchs with things I've been exploring on both this blog and The Farm recently.

A popular theory making the rounds regarding the monolith is that it was left by someone affiliated with the HBO sci-fi series Westworld. The monolith is located near Lockhart Basin in San Juan County. The closest town of any significance is Moab. This whole region has long been a popular filming location for Hollywood, especially when it comes to Westerns. Hence, the presence of Westworld at a location near the monolith.

Westworld and ARGs (and spoilers)

If the Utah monolith is indeed some kind of LARP conceived of by the Westworld crew, its most apt for both the show and this time in history. One thing that I've explored lately is the murky netherworld of alternate reality games (ARGs), especially in regards to how their techniques have been hijacked by public and private intelligence services. ARGs have clearly had an enormous influence on the HBO series. Indeed, the namesake park in which the first two seasons unfold is a kind of ARG for the affluent to indulge in their basest impulses. 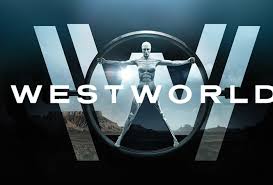 But one particular "guest," the brutal Man in Black character (Ed Harris), is obsessed with the notion of a broader game being at play. His intuition is proven correct by the end of that season. Dr. Robert Ford (Anthony Hopkins), the park's "puppetmaster" (the preferred to title for someone running an ARG), has already expanded the game beyond those confines. Large portions of the staff are themselves "hosts" (lifelike androids programed to be at the mercy of the guests) and some have been given "special" instructions, while other appear to have become self-aware. The effect is to utterly blur the difference between reality and the game, something all good ARGs manage.

During the show's third season, it largely leaves the park and presents the viewer with a horrific depiction of modern America. Social control has become a refined science (largely based on cybernetic principals, of course). Human beings profiled as "outliners" (i.e. those with a large capacity for social deviancy) are considered a threat to the social order. Pacification of these elements takes two forms: pointless wars and petty criminal activity. In that sense, not much has managed, though some novel methods are now employed. Criminal activity is largely managed through an app known as RICO.

As the third season unfolds, it is revealed that the app is owned by the same company that controls the Westworld park. Both, in turn, are managed by an A.I. known as Rehoboam. This particular A.I. appears to have structured the RICO activities along the lines of ARGs, with players effectively being sent on "missions" (often minor crimes to benefit the interests of the A.I.), the success of which supplements their meager incomes (the equivalent of acquiring tokens).

More broadly speaking, the park (an enormous ARG) was used to acquire personal data on users. This data was later turned over to Rehoboam, which used it to craft highly accurate personality profiles for society at large. This is at the heart of the social control depicted throughout the dystopian future of season three. ARGs have long been used for similar personality profiling while the type of control system shown in Westworld appears to be modeled on Cambridge Analytica's profiling methods. Of course, those methods in turn were surely adopted from ARGs in part.

And what of the monolith itself? Is it a kind of ARG? Certainly, it seems to have a few of those elements, most notably the treasure hunt component that's so crucial. The timing is also curious. The monolith apparently went undetected for over four years until agents of the Utah Division of Wildlife Resources happened to notice it on November 18th while surveying sheep via helicopter.

Accounts of it started to spread like wildfire here in these United States the following week as the Thanksgiving holiday started across the nation. This ensured an ample audience as it went viral, especially with travel concerns growing over COVID. This story has those generated far more attention than it likely otherwise would, especially in such an unprecedented year. Already, there's been a lot of internet sleuthing to ascertain the origins and motives behind the monolith.  And sooner or later, the treasurer hunters will be making the scene.

It will certainly be interesting to see how all this plays out. Will the story simply fade away in the coming weeks as more pressing concerns come to the forefront (more on that in a moment)? Or, is their another wave in the works? As its 2020, the possibility that a stainless steel monolith in a Utah desert playing some kind of international role cannot be discounted.

It's certainly fitting that the monolith would appear in the heart of Mormon country. They know a thing or two about LARPing and faux artifacts, after all. But there are much darker things about Mormonism than their ridiculous pseudo-history. And that is garishly on display in the nearby area from where the monolith was found.

Rockland Ranch is located about 40 minutes south of Moab. This is the site of a "fundamentalist Mormon" (i.e., those who still practice polygamy) community that has recently gained national exposure. It is the setting of the Netflix series Three Wives, One Husband and also the location of "The Rock Rally." The latter is one of the largest festivals for fundamentalist Mormons, attracting hundreds of visitors a year.

Rockland Ranch has certainly done its part to put a wholesome, family-centric face on fundamentalist Mormonism. But it's cult-like nature is never far from the surface. Many of the denizens who attend this festival, as well the broader fundamentalist community, came up in the Fundamentalist Church of Jesus Christ of Latter-Day Saints (FLDS). And nowadays, it's hard to deny the FLDS was and is a full blown cult. The sects infamous leader, Warren Jeffs, is currently serving a life sentence for sexual assault committed against two of his underage "brides" (one was 15, the other 12). Jeffs has long been accused of the sexual abuse of minors, including by his own family members. Further, he promoted the practice of "child brides" among his followers. This is the sort of milieu that has often characterized fundamentalist Mormonism.

Rockland Ranch has gone to great lengths to downplay any connections to the FLDS. They are more forthcoming up their links to the LeBaron family, which has quite a dark and violent history south of the border. Enoch Foster, the son of the founder of Rockland Ranch and the principal subject of Three Wives, One Husband, has acknowledged being related to the Langford family, another Mexico-based fundamentalist Mormon clan, and one that has intermarried with the LeBarons for decades now. Thus, Foster is almost surely related to the LeBaron family as well.

As I noted before here, the LeBarons have been at the center of controversy of late. They, along with the above-mentioned Langford family, were targeted during the 2019 massacre in Mexico that left nine fundamentalist Mormons dead. Less well known are the disturbing ties this same branch of the LeBaron family has to the NXIVM cult. As in, they were providing it with girls.

So, to recap: This mysterious monolith appears in a region featuring one of the more storied fundamentalist Mormon compounds, and one engaged in quite the charm offensive of late. And all with the specter of the FLDS, the LeBarons, and all those "child brides" hanging over it. And in a state long controlled by a church that has been engaged in LARPing and mythmaking for a very longtime now. Quite a potent combination to be sure, especially when one considers some of the more recent shrines crafted in the state of Utah.

It's No Game II

All of this makes for an interesting puzzle to unravel over the Thanksgiving holiday to be sure. And it may even be less ominous than a story that broke during Black Friday and will thus receive far less attention than the Utah monolith. Or, at least we can hope that's the case. If this thing does go viral, it probably means war is about to break out.

All of this is deeply unsettling in light of recent changes made at the Pentagon. This includes a veteran special operator ascending to the Secretary of Defense post; the US Special Operations Command effectively becoming its own branch of the military, on par with the Army, Navy, etc.; and one of General Michael T. Flynn's closet aides assuming control of virtually all special operations forces and military intelligence. Flynn is of course one of the most militant Iran hawks in the national security establishment. During his short-lived tenure as Trump's first National Security Adviser, Flynn was quick to put Iran on "notice."

Is this a last ditch effort for the Flynn loyalists and elements within Israel to provoke a war with Iran? John Brennan, a onetime Obama-era CIA director turned fanatical anti-Trumper, certainly seemed to think so. Of course, the administration Brennan most recently served in witnessed the assassination of no less than four Iranian nuclear scientists. Naturally, the legacy media has long forgotten these things.

It is doubtful Iran has, however. While its widely believed Biden will offer them more favorable terms, whether or not that will actually be the case is debatable. This puts Iran in a precarious position. If the early names floated for Biden's cabinet are any indication, he will be even more hawkish than the Obama regime. He is also likely riddled with dementia, ensuring he will be more "hands-off" in regards to the national security apparatus than either Obama or Trump.

For these reasons, an attack by this Islamic regime against Israel is not outside the realm of extreme possibility. The Iranians may ultimately conclude that a war with Israel would provoke enough chaos in the US political system to warrant the risk. It's been that kind of year, after all.

And with that I shall wrap up for now dear readers. If you haven't already, please consider becoming a paid subscriber for The Farm's exclusive content. Next week. I'll drop an epic discussion between Christopher Knowles and myself on all things Millennium and its incredible parallels with 2020. Not to be missed.

Anyway, until next, stay tuned.