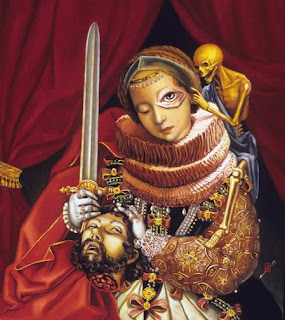 Regular readers know that I attach much significance to the act of decapitation. This grizzly act is something that appears symbolically in the occult over and over again, but the significance is rarely addressed. So it was with little surprise that I encountered a series of symbolic decapitations in the Rosicrucian manifesto The Chymical Wedding of Christian Rosenkreutz. First published in 1616, the work is a allegoric 'romance' of one Christian Rosenkreutz who's called on a seven day journey to assist in a royal chemical wedding. On the fourth day, various royal persons are ceremonially beheaded:

"The feast over, the young King, holding in his hand the little black book from the altar, asked the guests if they would all be true to him through prosperity and adversity, and when they tremblingly agreed he asked that each should sign his name in the little black book as proof of his fealty. The royal persons then drank from the little crystal fountain, the others afterwards doing likewise. This was called the 'Draught of Silence.' The royal persons then sadly shook hands with all present. Suddenly a little bell tinkled and immediately the kings and queens took off their white garments and donned black ones, the room was hung in sable draperies, and the tables were removed. The eyes of the royal persons were bound with six black taffeta scarfs and six coffins were placed in the center of the room. The executioner, a Moor, robed in black and bearing an axe, entered, and beheaded in turn each of the six royal persons. The blood of each was caught in a golden goblet, which was placed in the coffin with the body. The executioner was also decapitated and his head placed in a small chest."
(quoted from The Secret Teachings of All Ages, Manly P Hall, pg. 533)

The Chymical Wedding can be read in its entirety here. 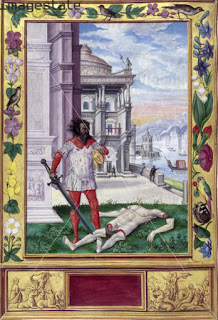 The six royal persons consist of three kings and three queens. On the sixth day the royal persons persons are resurrected, symbolizing the completion of the Great Work. Manly P Hall interprets the chymical wedding thus:

"Under the symbolism of an alchemical marriage, mediaeval philosophers concealed the secret system of spiritual culture whereby they hoped to coordinate the disjecta membra of both the human and social organism. Society, they maintained, was a threefold structure and had its analogy in the triune constitution of man, for as man consists of spirit, mind, and body, so society is made up of the church, state, and the populace. The bigotry of the church, the tyranny of the state, and the fury of the mob are the three murderous agencies of society which seek to destroy Truth as recounted in the Masonic legend of Hiram Abiff. The first six days of The Chemical Wedding set forth the processes of philosophical 'creation' through which every organism must pass. The three kings are the threefold spirit of man and their consorts the corresponding vehicles of their expression in the lower world. The executioner is the mind, the highest part of which -symbolized by the head -is necessary to the achievement of the philosophical labor."
(The Secret Teachings of All Ages, pg. 537) 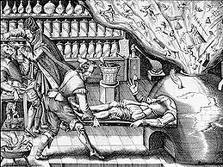 In alchemy decapitation can also be symbolized by nigredo, or 'blackness.' House of the Sun notes:

"Nigredo, or blackness, in the alchemical sense, means putrefaction, decomposition. By the penetration of the external fire, the inner fire is activated and the matter starts to putrefy. The body is reduced to its primal matter from which it originally arose. This process is also called ‘cooking’. The black earth is closed up in a vessel or flask, and heated...

"The Body is to be decomposed, that is one shifts one's awareness to the inner self. The planets are both stages of the process and energies in the body to be transmuted. The Saturn star is black as Saturn reigns over Nigredo. Sun and Moon are the opposites to be united, and fire and air are the elements stimulating the decomposition. The black crow is another symbol for Nigredo. The two birds coming out of the body are the soul and the spirit. One needs to become aware of one's soul and spirit. The circle emphasizes the idea of union or unification.

"In alchemy, one of the symbols of nigredo is the ‘decapitation’, and also the ‘raven’s head’ (caput corvi). Those symbols refer to the dying of the common man, the dying of his inner chaos and doubt because he is unable to find the truth in himself. In one of his works, Hercules cleanses the Augias stables. It is the cleansing of all the impurities in oneself...

"Saturn is the planet that rules nigredo. Saturn as an alchemical symbol is used, like Mercurius, as a symbol of chaos, the prima materia as rough stone, and as the philosopher’s stone. These are all symbols for man at the beginning of the alchemical process. Saturn, with his traditional scythe and hourglass, is the god of death and putrefaction, from which new life will arise. The scythe is another tool for penetration, as is the lance and the sword. Saturn is the philosopher’s lead. He is the god that can cause melancholy and devilish visions. ‘Melancholia’ is another term for nigredo. As melancholy can arise when alchemically working on oneself, the alchemists advised the use of music to lift the soul.

"Saturn is also a god of fertility. Therefore 'our black earth is fertile earth', an alchemical expression to express the transformation of death into new life, which is also clearly depicted in the thirteenth tarot card. The putrefaction is a necessary phase to start a new beginning. Life itself is a cycle of death and birth, ever creating new life, giving man the opportunity to work on himself and strife to improve his condition." 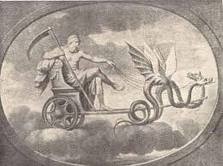 Decapitation has thus become closely associated with the phoenix in the occult, decapitation representing the period of putrefaction before rebirth can occur. Even Christianity plays into this relationship via the Baptist and Christ -John was of famously beheaded, giving way to Christ. 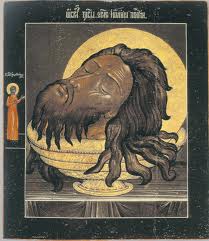