Another week, another podcast. Actually, this one was conducted last week, but I'm just now getting around to publishing it. I do believe that I've now participated in more podcasts in 2019 than in the previous eight years in which I've published this blog combined. And I should have at least one or two more interviews published before the year concludes. It kind of blows the mind, though I am most grateful for having the opportunity to present my research in this other medium with increasing frequency.

This week I'm being interviewed by Skyler of Philosophical Minds, another new podcast. Unfortunately, we were a little pressed for time due to miscommunications on my part, but we still managed to cover a wide range of topics in the 45 minutes or so that we had. They included: Las Vegas, New Mexico, and all of the black research that goes on in this region of the country; the legendary (or infamous, depending upon one's point of view) Special Operations Executive (SOE) and its role in relation to the Office of Strategic Services (OSS) and MI6; the relationship, or lack therefore of, between Projects BLUEBIRD, ARTICHOKE, MK-ULTRA, and OFTEN; the credibility of Gordon Thomas' research; the Joint Special Operations Command (JSOC) and the possible influence the SOE had over it; the different missions of JSOC and the Green Berets and the contrasts between "unconventional warfare" and counterinsurgency; the Vatican's hierarchy; and of course, the Sovereign Military Order of Malta (SMOM), Opus Dei, and the Legionaries of Christ, and the rivalry these reactionary Catholic orders have with the Jesuits. The Templars and their possible ties to Freemasonry are also addressed very briefly. There's probably a host of other topics addressed I'm forgetting as well. Like I said, not a bad haul for about 45 minutes.

The podcast can be found here.

More information on the various CIA "behavioral modification" programs can be found here.

More on the SOE can be found here and here.

More on the rivalry between SMOM/Opus Dei and the Jesuits can be found here.

And finally, more on the rise of JSOC can be found here.

As always dear readers, I hope that everyone enjoys the interview. And a big thank you to all of the podcasts that have graciously had me on as a guest this year. It certainly has been a long, strange trip, but also an immensely rewarding one. And with that, I shall sign off for now. Until next time, stay tuned. 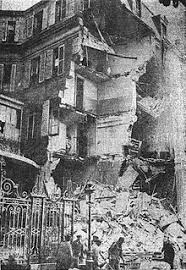