The Deep Politics of The X-Files Revival 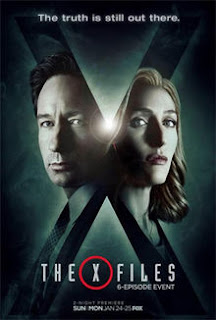 Your humble author became enamored with The X-Files from the very beginning --I watched the pilot at the ripe old age of ten way back on September 10, 1993. Even then I was aware that I was watching something special and in hindsight X-Files clearly had an enormous influence on my development. Everything about the show from the look, the music and especially the subtext was pitch perfect. It seemed both incredibly cutting edge and yet timeless, in the great tradition of paranormal-themed shows that had inspired it such as The Twilight Zone, The Outer Limits and Kolchak: The Night Stalker (all of which I discovered as a result of The X-Files).

As such, it should come as little surprise that I eagerly anticipated the series' revival. After two enthralling episodes, I feel secure in the saying that The X-Files surely has its mojo back if it ever in fact lost it. The show is both more timely and subversive than ever and that has already triggered some very angry reactions from the Establishment media. The great Christopher Knowles has already given an outstanding rundown of this curious state of affairs:


"So Carter again sets out to scare his audience. And he does so by doing what he's always done- reach into the Jack-in-the-Box of America's Nightmare Cabinet and force the fringe into the mainstream.

"That he seems to be taking so much flak shows that he is indeed striking some very sensitive nerves, which is why mainstream voices-of-record The New York Times and Entertainment Weekly were not content to attack "My Struggle" once, they actually did so twice...

"Lest you think that's some editorial quirk, look at the bad review in Time, which not only completely misinterprets the mandate of the original series (fun?) but cites the authoritarian propaganda orgasmatron The Dark Knight as the example Carter should be following..

"So apparently it's not OK to write about this stuff anymore, not even as fiction. It was OK during the Bush era, it was OK to be suspicious of the Powers-That-Be then. Michael Moore made millions doing so. But not with the Anointed One in the Oval Office." 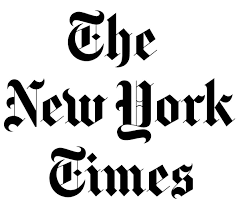 And yet The X-Files is a property of Fox, a key piece of the media empire of mogul Rupert Murdoch. And Murdoch is as much a "Voice of the Establishment" as anyone.

This is of course not the first attempt made to revive The X-Files after the show came to a brisk conclusion in 2002, in the wake of 9/11. That attempt consisted of the poorly-received 2008 film, I Want to Believe. Budgeted at a mere $30 million, this low key and highly allegoric film was none the less released on July 25th, right in the midst of the summer blockbuster season. While probably already doomed due to a plotline existing outside of both the show's mythos episodes and classic monster-of-the-week features, the timing of the release probably couldn't have been worse. 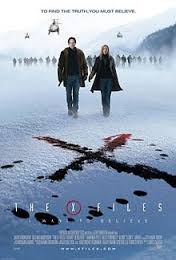 It is also interesting to note that this largely apolitical film was released several months before the Anointed One entered the White House, when the presidency was still possessed by George W. Bush and military-industrial complex shill John McCain still had some (slim) possibility of attaining the presidency.

And now, eight years later, The X-Files returns during another presidential cycle, this time with a generous budget and a choice prime TV slot. And of course one of the front runners, Hilary Clinton, was First Lady during the show's 90s heyday.

Is it a coincidence that Fox seemingly sabotaged The X-Files revival in 2008 during the finals months of the Bush II's presidency while going all in to make the 2016 miniseries a major hit in the final months of Barack Obama's presidency?

I think not and the seeming schizophrenic reaction of the "Establishment," with Fox going all out for the revival while the pen snipers of the New York Times and such like take aim, is a prime example of the split amongst the ruling elite. In the notorious Tragedy and Hope, Carroll Quigley referred to The New York Times as one of the five newspapers with which "The American branch of this 'English Establishment' exerted much of its influence through..." (pg. 953). Earlier Quigley had dubbed this "English Establishment" the Anglo-American Establishment and had argued that it exerted much control via the wealth of powerful American families such as the Morgans and the Rockefellers and influential think tanks such as the Council on Foreign Relations (CFR). 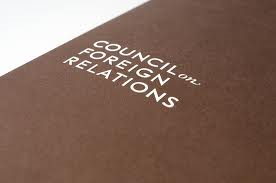 To some extent the CFR and like organizations had dominated (but not controlled) the American political scene from roughly the end of the Civil War until the 1950s. By the early 1970s the power of the CFR was in decline and a host of usurpers had emerged to challenge the authority of the Anglo-American Establishment.


"...  In the Nixon era the multilateralist policies of the once-dominant Council on Foreign Relations came to yield place to the unilateralist and neocon policies of the once-marginal American Enterprise Institute. A key moment was the split in the CFR establishment after 1968, dividing the 'traders' (those who were concerned for international economic order) from the 'Prussians' or 'warriors' (those who were concerned for preserving U.S. predominance over the Soviet Union.) This last group included the first neocons...

"Future Supreme Court Justice Lewis Powell, in a 1971 confidential memorandum for the U.S. Chamber of Commerce, warned that survival of the free enterprise system lay 'in organization, and careful long-range planning and implementation, and consistency of action over an indefinite period of years, and in the scale of financing available only through joint effort, and in the political power available only through united action and national organizations.' Soon, funding for this right-wing ideological offensive was being provided 'by a small sewing circle of rich philanthropists --Richard Mellon Scaife in Pittsburgh, Lynde and Harry Bradley in Milwaukee, John Olin in New York City, the Smith Richardson family in North Carolina, Joseph Coors in Denver, [and] David and Charles Koch in Wichita.' With support from these foundations America saw a spate of new and well-funded right-wing organizations, such as the Scaife-backed Moral Majority and the interlocking Coors-back Council for National Policy (once called by ABC News 'the most powerful conservative group you've never heard of').

"The stage was set for what political commentator Kevin Phillips and others have called the 'greed decade' of the 1980s, when 'the portion of the nation's wealth held by the top 1 percent nearly doubled, skyrocketing from 22 percent to 39 percent, probably the most rapid escalation in U.S. history.' With the spreading gap between rich and poor, the ideal of a public state in which all classes participated was further weakened by the reality of the deep state or security state in which, more than ever before, the few manipulated the many. This was facilitated by a parallel development in the media, with the emergence of new press barons like Rupert Murdoch and Conrad Black. As journalist David Brock wrote: 'In the late 1970s and early 1980s, Keith Rupert Murdoch [the prime example] went on a buying spree in the United States, purchasing papers in San Antonio, New York City, Boston, and Chicago. American journalism was never the same.' "

Rupert Murdoch is a long time favorite of the American Enterprise Institute, possibly the premier think tank for the Right Wing Establishment. Thus, there clearly seems to be some behind-the-scenes shenanigans in regards to the recent attacks The X-Files miniseries has endured.

In 2008, during the first bid to revive The X-Files, it was Fox News and co who regularly marginalized conspiracy theories (except those involving Muslims of course) as they had all through out the Bush II regime. During the Obama years, the tin foil hat straw man has been savaged by the older news outlets while Fox provided a platform for Glen Beck and the like. Going further back, The X-Files provided a glimpse of the dark underbelly of the American deep state during the feel-good Clinton years when the nation was collectively happy and fat.

It likely took so long for a second X-Files revival to gain steam due to the change in the collective pulse of the nation. There is far more anger and paranoia out there in Obama's America than there was in Clinton's. If Fox was simply being driven by financial concerns, it seems likely a revival would have happened before now. Certainly the early ratings indicate that the public is ready for the kind of message that Chris Carter and company are offering.

But the political landscape in the country is in total disarray. Establishment pols like Jeb Bush and Hilary Clinton are struggling to continue their dynasties while Donald Trump and Bernie Sanders have effectively tapped into the growing populist resentment of Beltway figures. Is X-Files simply a desperate Hail Marry to stave a off still likely Clinton presidency or something more?

Only time will tell, but it is surely we, the viewers, who will benefit the most. In this deeply confused political landscape The X-Files is arguably more subversive now than it ever has been. While taking pot shots at both the Bush II and Obama regimes, it has delved into 9/11 false flags, suppressed energy tech, mass surveillance, the militarization of American police forces and a host of other taboo topics that are rarely brought into popular entertainment anymore.

There have only been a few instances where the revival has slipped thus far. One is its depiction of the Roswell crash, a long time favorite of the UFO crowd that is none-the-less highly dubious when one considers considers the sources behind it (I've addressed this topic before here and here while more interesting information and a much more thorough account of the likely Roswell psyop can be found here).

Another is the Tad O'Malley (Joel McHale) character, a right wing shock jock that has been frequently linked to Alex Jones and Glen Beck. Chris Carter and company seemingly missed a golden opportunity to expose the intelligence community's extensive manipulations of the conspiratorial right (which I've addressed at length before here) with the character. But then again, with Fox still bank rolling the show, Carter may have felt compelled to tread lightly in this regard. After all, the Ring Wing Establishment has always been far more comfortable with the "paranoid style" than their Eastern counterparts.

But ultimately Carter and co take a bold stance with the revival. It is fitting that during the final moments of the second episode, "Founder's Mutation," that images from Kubrick's 2001: A Space Odyssey are shown. Kubrick was another deeply subversive filmmaker who made several bold attempts to expose the American deep state in his films. One of the most noteworthy is Dr. Strangelove, a film that likely was only made due to the deep division in the American deep state at the time (as I addressed at length before here).

While Kubrick is always hard to top, I would not bet against Chris Carter. Hopefully audiences will stick with the miniseries despite the lashing it is taking from critics. Kubrick's final film, Eyes Wide Shut, was arguably sunk by a similar hate campaign. But the nation is different now and Establishment opinion means less than ever before. So here's hoping the masses can weather the storm and see things through to the end. 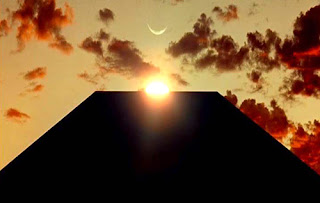