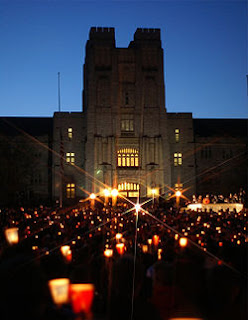 I'm currently away from home, and thus will not be able to discuss the latest V-Tech shooting as thoroughly as I would like without the benefit of my library. There are so many bizarre synchronicities in this tragedy that pages upon pages could be written about it, but for now I will only be able to offer a rundown. For those of you living under rock, here's an account of the latest shooting:


"The man who authorities say killed a Virginia Tech police officer was described as a typical college student in many ways, making it difficult to understand why he would commit an armed robbery and then, apparently at random, target the patrolman before killing himself.

"The gunman was identified Friday as Ross Truett Ashley, a 22-year-old part-time business student at Radford University, about 10 miles from the Virginia Tech campus in Blacksburg. He first drew authorities'attention Wednesday when, they say, he walked into his landlord's office with a handgun and demanded the keys to a Mercedes-Benz SUV...

"Virginia State Police said he walked up to officer Deriek W. Crouseafter noon on Thursday and shot him to death as the patrolman sat in his unmarked cruiser during a traffic stop. Ashley was not involved in the stop and did not know the driver, who is cooperating with police, they said.

"Authorities said Ashley then took off for the campus greenhouses, ditching his pullover, wool cap and backpack as police quickly sent out a campus-wide alert that a gunman was on the loose. Officials said the alert system put in place after the nation's worst mass slaying in recent memory worked well, but it nevertheless rattled a community still coping with the day a student gunman killed 32 people and then himself.

"A deputy sheriff on patrol noticed a man acting suspiciously in a parking lot about a half-mile from the shooting. The deputy drove up and down the rows of the sprawling Cage parking lot and lost sight of the man for a moment, then found Ashley shot to death on the pavement, a handgun nearby. No one saw him take his life and he wasn't carrying any ID."

In addition to the obvious connection to the spree shooting that occurred at Virginia Tech in 2007 that left 33 people dead including the shooter, there is also a connection to the Fort Hood shootings of 2009 via the police officer, Deriek Crouse, that was killed. Continuing with MSNBC:


"Crouse was a member of the Army Reserves who served a year in Iraq beginning in March 2004, according to the U.S. Army Human Resources Command. He was assigned to active duty service at Fort Hood, Texas from October 1993 until July 1996, where he was listed as an M1 armor crewman, or tank operator. From July 1996 to May 2001, Crousewas listed as a motor transport operator with the 316th Sustainment Command in Galax, Va. Crouse's last rank was staff sergeant."


"Those who knew Ashley said he could be standoffish. He liked to run down the hallways and recently shaved his head, a neighbor said."

Loughner, whom I've written more on here, shaved his head shortly before his shooting spree in Tucson that centered around U.S. Representative Gabrielle Giffords. The latest Virginia Tech shooting occurred exactly 11 months after the Tucson shooting. According to Aleister Crowley, 11 is the number of magic.

Virginia Tech has an interesting history of massacres. The campus was built either near or on the site of the Draper's Meadow massacre that occurred amidst the French and Indian war. Of the massacre, Wikipedia notes:


"A group of Shawnee entered the sparsely populated camp virtually unimpeded. At least five settlers were killed: Mr. Patton, Elenor Draper (Mary Draper Ingles' mother), Bettie Draper's baby, Casper,[2] and Philip Barger, who was described as an old man and was decapitated by the Indians; they delivered his head in a bag to a neighbor, explaining that an acquaintance had arrived to visit[3]. Five settlers were taken back to Kentucky as captives to live among the tribe, including Mary Draper Ingles [1], who escaped at Big Bone, Kentucky, and made a journey of more than eight hundred miles (1300 km) across the Appalachian Mountains back to Draper's Meadow. Her marriage to William Ingles is said to be the first white wedding west of the Alleghenies. Also taken captive were her two sons; one of whom, Thomas Ingles, lived among the Indians for many years and never fully gave up the Shawnee way of life.[1]"

The date of the shooting, December 8th, is also very loaded. In recent times it is most noted for the death of John Lennon, who was murdered by Mark David Chapman in front of the Dakota building in 1980. The Lennon killing has been an object of speculation in conspiracy culture of years. Many believe Chapman was a 'programmed' killer, as were many other notorious three-named assassins over the years. Our latest shooter, Ross Truett Ashley, has already gained such a distinction.

The date of December 8th has a strange connection with the Stuart dynasty as well. The Stuarts are also objects of much speculation in conspiracy circles. They have been linked with Jesus Christ's bloodline line via theories surrounding the Merovingian dynasty. They have also been credited with spreading the Scottish branch of Freemasonry to France during the flight of Charles Stuart I. Mary Stuart, who was beheaded during the reign of Elizabeth I, was born on December 8, 1542. Charles Radclyffe, a staunch follower of the Stuart dynasty, died on December 8th, 1756. Radclyffe was an allegedly Grand Master in the Priory of Sion. 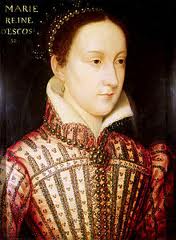 Finally, December 8th plays into the enigma of 23, made famous by Robert Anton Wilson. On the 23 enigma, Wilson wrote:


"I first heard of the 23 enigma from William S Burroughs, author of Naked Lunch, Nova Express, etc. According to Burroughs, he had known a certain Captain Clark, around 1960 in Tangier, who once bragged that he had been sailing 23 years without an accident. That very day, Clark’s ship had an accident that killed him and everybody else aboard. Furthermore, while Burroughs was thinking about this crude example of the irony of the gods that evening, a bulletin on the radio announced the crash of an airliner in Florida, USA. The pilot was another captain Clark and the flight was Flight 23.

There are 23 days remaining in the year after December 8th.

And this, dear reader, concludes our V-Tech shooting round up. Cheers. 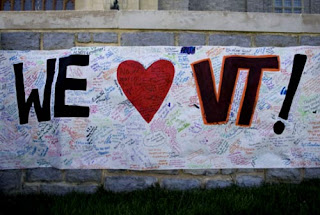 UPDATE 12/11/11:﻿
Loren Coleman has some more interesting synchs surrounding the latest VA Tech shooting. I urge my readers to check out his latest post here.
Posted by Recluse at 7:13 AM