Much has been written on the Denver International Airport, most of it likely BS. I am hesitant to enter the fray yet its bizarre symbolism and possible Old World location fit in so well with the correlations I've been trying to make in regards to modern structures and the ancient occultic 'science' of ley lines that I feel it warrants mentioning. This will mark the second installment in my "New World?" series, the first of which can be read here. 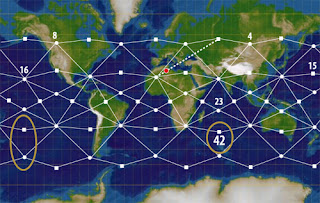 I myself have personally been through the DIA on several occasions while briefly living in Colorado Springs but at the time I knew nothing of the occultic arts that I know, though I certainly heard the ample rumors floating around about the place. At the time I chalked them up to yuppie/phony Christian Focus on the Family clique that dominated the military-industrial complex around the Denver/Colorado Springs area. But knowing the things I know now, I must reconsider much perception of the entire time I spent there. Colorado Springs, with Garden of the Gods, NORAD and its historic links to Tesla, among other things, probably warrants its own post. The DIA will certainly provide enough fodder for this installment, so to it. 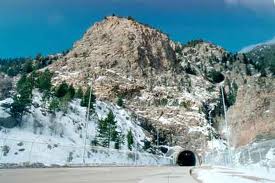 As previously alluded to, much of the information on the DIA is not entirely reliable so we must tread with caution. In regards to its Old World connections, we'll start with latitude, which is 39' 51'. According to Robert Temple in The Sirius Mystery, numerous shrines in antiquity were located between the 31' 30' N through 39' 30' latitude. Included between these degrees is the infamous 33rd degree North latitude which I've written more on here. In general points at or between the 31' 30' and 39' 30' seem to be lightening rods for Masonic ritual workings and shrines. The DIA is ever so slightly outside of 39' 30' North degree, but perhaps there is something significant attached to the DIA, but located slightly south of the actual airport that falls within the 'mystery parallels.' 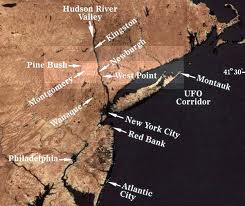 Another common claim about the DIA is that its built upon an Indian burial ground. This has been hotly debated amongst the various factions. One view holds:

Denver International Airport, built in 1995 and residing only 20 minutes east of downtown, is on sacred Indian burial ground, and it now appears the city is considering a $1 billion facelift of the airport, including the construction of more facilities.

Albeit, if the voices of protest aren't speaking loudly enough, the spirits most certainly are. Pass through any one of the concourses at DIA — especially Terminal A — and one will detect the subtle, familiar sounds of American Indian flute. The high harmonies play on a continual loop, serenading frequent fliers from camouflaged speakers behind glass cases displaying old Indian trinkets and blouses.

These flute tunes aren't there to pay homage to the plains Indians who once inhabited the area. Nor do they play to create a "Welcome to the West" ambiance for airport patrons on layover to Seattle. No. The Indian flute plays to pause the pranks and creepy occurrences that sweep the facility.

Rumors that the new airport was built atop a Native American burial ground have circulated for years, though copious archaeological research has never found any evidence to support them. What's more, a group of Indians already blessed the airport in a religious ceremony eight years before. But Allrunner, a volunteer member of the city's "DIA Spiritual Resolution Committee," says it was best not to take any chances. Allrunner, who is part Cheyenne, succeeded in convincing representatives of the Montana Cheyenne to come to DIA and calm the Indian ghosts in a nighttime ritual conducted on Easter weekend.

The prior article sited  goes on to note that public funds were actually spent to perform some kind of exorcism on the facility. This would of course be far from the outrageous cost of the facility. The initial cost of construction was a mere $1.7 billion, yet by the time the airport was finished cost had added up to $4.8 billion. While the state-of-the-art automated baggage system that never actually worked is a common whipping boy for $3.1 billion discrepancy, there are numerous other curious features that Vigilant Citizen notes:
This has led many to speculate that some kind of vast underground base was constructed beneath the facility. As outrageous as this may seem, the Denver area would be a logical choice for such a facility. Colorado's legendary altitude provides miles upon miles of sheer rock covering for any such base, which would make it possible of surviving virtually any kind of apocalypse. That's why the NORAD base is built just a little ways south in Colorado Springs. Further, the vast military presence that already exists in the area, in terms of both bases and defense contractors, makes it an idea rallying point for VIP looking to avoid any kind of putsch. 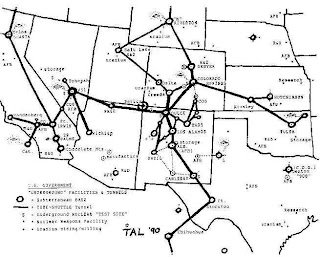 Personally I think Jesse Ventura is a disinformation agent but there's some decent information in this video on the underground base theories surrounding the DIA, though I urge all of you to take it with a huge grain of salt.

What really fascinates me about the DIA is its bizarre symbolism in its artwork and design. It almost literally appears to be some kind of Masonic temple. For starters, the runways are built in the shape of a swastika. 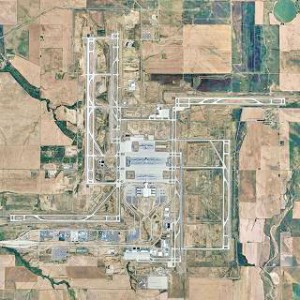 Leading up to the airport are a series of occult sculptures. One of them is a giant blue horse with blazing red eyes. 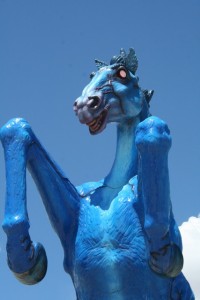 It's sculpture, Luis Jimenez, was killed while building the thing:

Mr. Jimenez was killed working on the sculpture. In 2006, while he was hoisting pieces of the mustang for final assembly in his New Mexico studio, the horse's massive torso swung out of control and crushed the 65-year-old artist. Mr. Jimenez's widow and children helped finish the sculpture, and it was installed last February at the airport, at a cost to the city of $650,000. 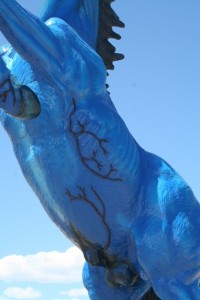 ﻿
All kinds of bizarre explanations abound on the Internet concerning this piece, especially in regards to its relation to the pale horse of the Book of Revelations. I had generally dismissed these claims as I've seen little evidence that horse would be blue, but the Pale Horse of the Apocalypse would be in keeping with the next sculpture that was erected. 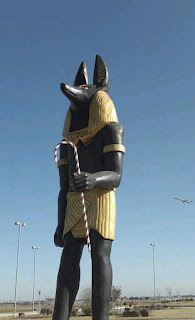 This is Anubis, the Egyptian god of the dead. This Fox Article states:

DENVER - As if a 30-foot tall blue horse with glowing red eyes wasn't startling enough, travelers at Denver International Airport are now being greeted by a new Behemoth.

On Wednesday, workers erected a 26-foot tall, seven-ton replica of Anubis, the Egyptian god of the dead, adjacent to the main terminal. The statue is here to promote the upcoming King Tut exhibit at the Denver Art Museum.

According to one web site, Anubis is the "jackal-god of mummification," and "assisted in the rites by which a dead man was admitted to the underworld." 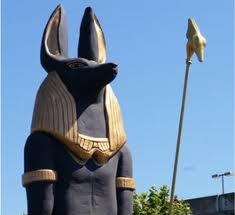 Inside the airport is a section known as the Great Hall, which is what Masons refer to their meeting halls as. And within the Great Hall is a Masonic capstone that's not to be opened until 2094 and featuring an interesting engraving. 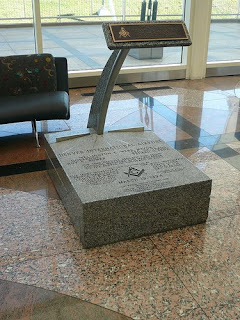 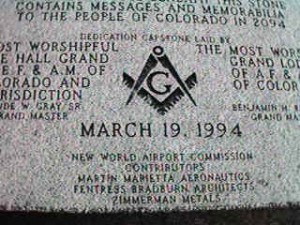 As you can see above, this capstone was dedicated by the 'New World Airport Commission,' an organization that does not exist. Thusly this seems to be some kind of refer to the Masonic New World Order that this airport seemingly celebrates. This is elaborately displayed by the murals below.

Much has been written on the murals of Denver International Airport so I will refrain from extensive commentary as there's not much I can add other writers haven't already beaten to death. So, here they are: 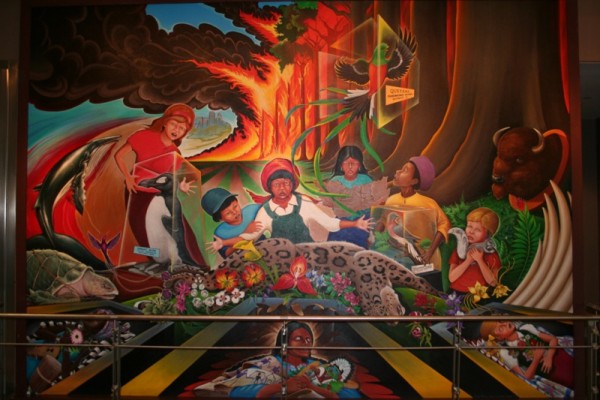 The above piece is entitled "Peace and Harmony with Nature." This is a rather odd title given that it depicts some kind of apocalypse. Perhaps peace and harmony once humanity have been liquidated?

The next piece is a two parter called "Children of the World Dream of Peace." Here's the first part: 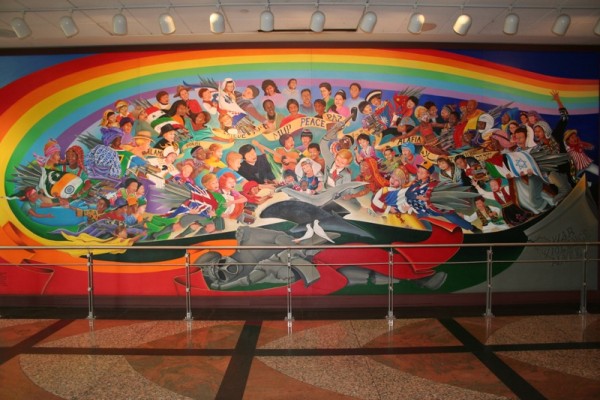 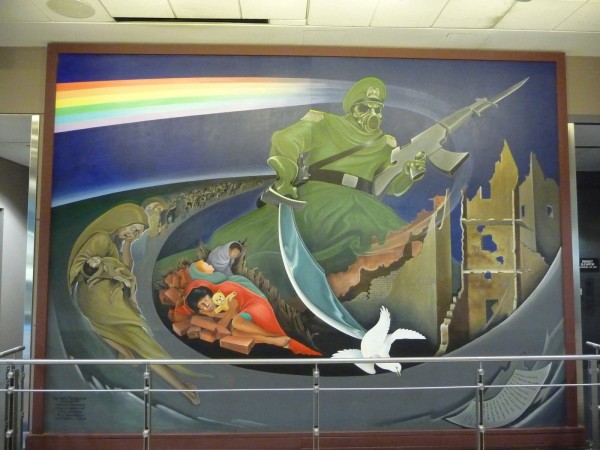 It's interesting to note the Nazi-like is holding a Shriner-style sword, known as a scimitar, as he pierces the dove of peace. All in all a lovely piece for an airport that's runways are in the shape of a swastika.

And now our third piece, which is apparently also known as "Peace and Harmony with Nature": 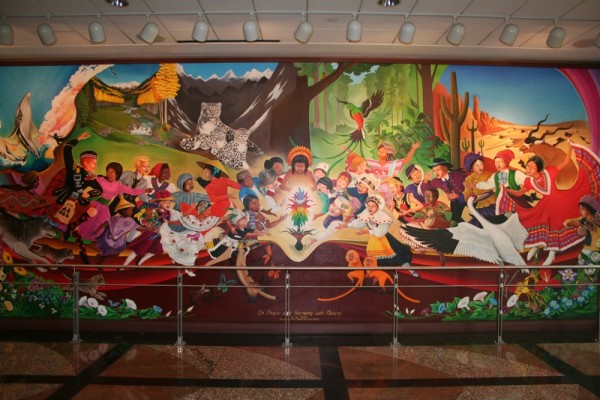 Here we seemingly catch a glimpse of the 'New Order' that the Denver Airport celebrates, an order that comes only after mass genocide.