More ritualistic-like deaths from the bloodstained Mexican state of Tamaulipas, of which more can be read about by following the previous link. In this case, a beheading:


The severed head of a Mexican investigator looking into the disappearance of an American has been delivered to authorities in Mexico, the sheriff on the Texas side of the border told NBC News on Tuesday.

Zapata County Sheriff Sigifredo Gonzalez is spearheading the investigation on the U.S. side. David Hartley vanished on Sept. 30 while on Jet Skis with his wife on Falcon Lake, which stretches into Mexico.
A spokesman for the prosecutor's office in the Mexican state of Tamaulipas confirmed that Commander Rolando Flores, the head of state investigators in the border city of Ciudad Miguel Aleman, had been killed.
Flores was investigating the disappearance of Hartley, but the prosecutor's spokesman said the death was unrelated.

Beheadings have been associated with ritualistic deaths for eons. Of course most have heard of headhunting and its religious significance in bygone eras. 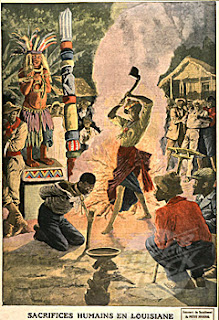 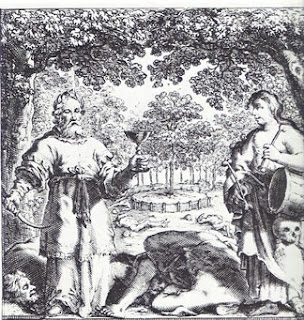 Even many high civilizations of antiquity had traditions of ritualistic decapitations, usually in association with the harvesting of corn or some like vegetable. Consider this Greek tradition:


...Lityerses was a bastard son of Midas, King of Phyygia, and dwelt at Calaenae. He used to reap corn, and had an enormous appetite. When a stranger happened to enter the cornfield or to pass by it, Lityerses gave him plenty to eat and drink, then took him to the corn-field on the banks of the Maender and compelled him to reap along with him. Lastly, it was his custom to wrap the stranger in a sheaf, cut off his head  with a sickle, and carry away his body, swatched in the corn stalks. But at last Hercules undertook to reap with him, cut off his head with the sickle, and threw his body into the river. As Hercules is reported to have slain Lityerses in the same way that Lityerses slew others (as Theseus treated Sinis and Sciron), we may infer that Lityerses used to throw the bodies of his victims into the river.
-The Golden Bough, James Frazer, pg. 436

As a synch note, the suspected murderers of the American tourist the headless inspector had been investigating are said to be 'pirates' and may have killed the tourist over pictures taken at a lake the operate out of. Lityerses was found of casting his victims into a river and in general many sacrificial victims were cast into beds of water in ancient times to appease the spirit within.

In more recent times the overlap between cults and gangs and the ritualistic-style deaths they covet has been overt. Consider the figure of Arthur R Manby,  a major player in organized crime around the Taos, NM area in the late 19th and early 20th century. 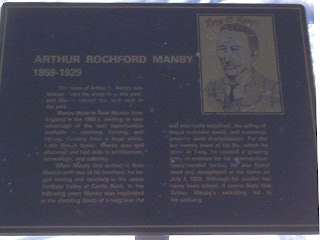 Like some of the Mexican drug cartels Mr. Manby also had a fondness for beheading his victims:

Manby was an odd amalgram of cultivated English gentleman, secret society adept, and vicious robber baron. Upon arriving in the Southwest in the 1880s, he became involved in a nonstop round of mine swindles and petty shakedowns. He graduated from these to a gigantic and still not completely understood attempt to get legal title to most of the land of present day Taos County, apparently in collusion with shadowy international financial forces in New York and London.

Manby moved in a homicidal haze where somebody or other seems to have ordered "Off with his head!" oftener than the Red Queen in Through the Looking Glass. His trail was littered with the decapitated heads of opponents and former associates. But in his semideranged old age, he seems to have lost control of the secret society that he had set up as his private terrorist and rub-out squad. His own decayed body (some said it was not his body) was found locked inside his house in the summer of 1929. It was decapitated. There was a half-chopped-away head sitting in the next room, but nobody was really sure if it was Manby's or not.
Weird America, William Grimstad, pgs. 148-149

Its good to see the old time tradition won't be dying out anytime soon, I suppose. Taos, New Mexico has been a lightening rod for cultist to this day. It was from there that Linda Kasabian came from before she joined the Manson Family, served as the driver during the Tate murders and eventually became a star witness for the prosecution. 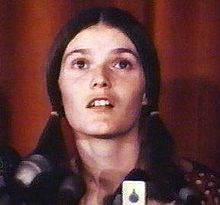 For those interested in more curious links between cults and gangs, be sure to read my epic Cults, Gangs, Dope and Intelligence article.
Posted by Recluse at 8:10 PM