Wars and Rumors of Wars -Updated 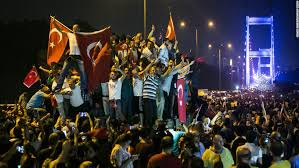 In antiquity, the month of July was known as a rather volatile time, especially at the onset of the so-called "Dog Days" of Summer. These were said to occur with the helical rising of the Dog Star Sirius and frequently resulted in fiery weather and even fiery tempers.


"The heliacal rising of Sirius was also important to ancient peoples. Here is a dramatic description by the ancient Greek poet Aratus of Soli of the rising of Sirius (often known as the Dog Star as it is in the constellation Canis, or "Dog"):

The tip of his [the Dog's] terrible jaw is marked by a star that keenest of all blazes with a searing flame and him men call Sirius. When he rises with the Sun [his heliacal rising], no longer do the trees deceive him by the feeble freshness and their leaves. For easily with his keen glance he pierces their ranks, and to some he gives strength but of others he blights the bark utterly.

"We see that this dramatic description of the rising of the star indicates an event which was certainly noticed by ancient peoples. Throughout Latin literature there are many references to 'the Dog Days' which followed the heliacal rising of Sirius in the summer. These hot, parched days were thought by that time to derive some of their ferocity and dryness from the 'searing' of Sirius..."

The helical rising of Sirius was by all accounts a major event in the ancient world, yet, as I've noted before, there is little certainty concerning the actual date on which it began. It is most often alleged to have been July 23, though some accounts place it on the twentieth. In David Ovason's classic The Secret Architecture of Our Nation's Capital, he cites July 3 as the beginning of the Dog Days.

Either way, we are almost upon the Dog Days if not already engulfed in their fury if the current state of the world is any indication. On July 14, 2016, a terror attack was carried out in Nice, France, involving a large truck that left some 84 people dead. As can be expected, the Internet is already awash with claims of "false flag," but this is perhaps to hasty. The technocrats in Brussels are already uneasy after Brexit and French officials already fear that another large scale terror attack could have serious (har har) repercussions for one of the two nations (along with Germany) chiefly responsible for the EU. Consider the following:


"Fielding questions behind closed doors from the Parliamentary Select Committee inquiry into the Paris attacks in November 2015, the transcript of which has today been released, Patrick Calvar, the head of the Directorate General of Internal Security (RPS) explained that it was not just an escalation of the terrorists’ capabilities he feared, but also the subsequent response from what he termed the 'far right'...

" 'I think we will win against terrorism; I am, however, more concerned about the radicalisation of society and the basic movement that drives it. That’s what worries me when I talk with my European colleagues: we will have, at one time or another, to provide resources to deal with other extremist groups because confrontation is inevitable.'..

" 'All of Europe is in danger of rising extremism so we are, domestically, trying to put in place the resources to watch far right groups who are waiting for confrontation,' he told Parliamentarians...

" 'If another attack or two occur, it will happen. It is therefore down to us to anticipate and confound all those groups who would, at some point, spark clashes between communities.' "

It may not even come to an armed revolt. Marine Le Pen was already surging in French polls prior to the nation's latest large scale terror attack and no doubt she is even better positioned after Thursday's events. And of course, there are the ever growing calls for "Frexit" as well, which could effectively be the final nail in the coffin of the EU.

This is most assuredly not what the technocrats in Brussels or the American Eastern Establishment want. On the other hand, the old guard aristocracy centered around the Le Cercle network, while once being a crucial alley of the United Europe movement, have grown increasingly Eurosceptic since the chairmanships of Lord Norman Lamont and Lord Lothian. While my inclination is that the recent attack was likely collateral damage from the disastrous US-NATO policy toward the Islamic world since 9/11, the objectives of the latter group are only going to be furthered with this latest incident.

And then there is the curious coup attempt in Turkey that appears to have been stillborn. Turkey's President, Tayyip Erdogan, was quick to blame a Pennsylvania-based cleric that was formerly close to his regime. This cleric, Fethullah Gulen, is in turn suspected to have a longstanding relationship with the CIA.

But this is Turkey we are talking about after all and there is a reason why this nation originated the deep state. Within said nation, there is a growing suspicion that Erdogan himself has sponsored the coup. Certainly Turkey and its military have a long history with coups and this latest effort seems shockingly inept, especially if it had backing from the CIA. Erdogan, by contrast, will appear as a national hero with the way cleared for him to further his authoritarian rule. He'll no doubt be greatly helped in this endeavor by being able to ascertain the Gulen loyalists and other adversaries in the military and brutally purge them.

But why would Erdogan single out a CIA-linked cleric as the coup plotter? In recent weeks Erdogan has been warming up to Putin and deescalating Turkey's recent tensions with Russia in the process. Is this the beginning of a closer relationship with Putin, one in which Turkey will bow out of NATO efforts to counter Russia?

Certainly raising speculation that the CIA was a partner in the coup will only make the pivot toward Russia an easier sell t the populace if that is in fact Erdogan's agenda. Only time will tell as events surrounding this coup are still murky at the very best and the parapolitics will likely only become apparent after some time.

But regardless, this is yet another sign that 2016 is different, a notion that gains more currency every day.

Well, that didn't take long. Erdogan has already demanded the extradition of alleged coup plotters and CIA asset (noted above) Fethullah Gulen from the United States while massive purges of both the military and other government branches (especially the judiciary) are well under way. At present some 265 people are officially reported dead as part of the failed coup.

Even more provocative, however, are the allegations made by by Turkish Labor Minister Suleyman Soylu that the United States itself was behind the coup. US officials, meanwhile, appeared to have been totally caught off guard by the coup. There is certainly a possibility of this as there is speculation that Turkey may currently be holding several US nuclear warheads hostage at their Incirlik Airbase.

Curiously, the are allegations that the Clintons have ties to Fethullah Gulen, the cleric Erdogan blamed the coup on. This is highly speculative, however and it is unknown if this has any bearing of these events currently unfolding.